You are here: Home / Legislature / Daily fantasy sports industry will have to pay to operate in Missouri

A daily fantasy sports bill has been signed into law by Governor Jay Nixon (D), who called on the legislature this year to tax and regulate the industry like gambling. The legislation will allow such companies to operate in Missouri, but it’s going to cost them. 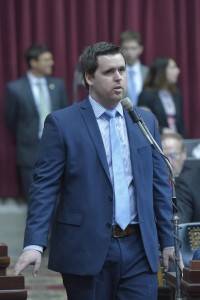 The industry will be required to pay an annual operating fee of 11.5% of its net revenue from Missouri participants for the previous year. The revenue collected from that fee will be deposited into the Gaming Proceeds for Education Fund.

Under the law, the Missouri Gaming Commission will regulate fantasy sports sites, including licensing of operators, as well as take action against those who violate the law.

To pay for the investigation and licensing of operators, the Commission will collect an application fee of $10,000 or 10% of any fantasy sports operator’s net revenue from Missouri participants for the previous year, whichever is less.

Bill sponsor Scott Fitzpatrick (R-Shell Knob) says his original bill didn’t include an operating fee, but says his legislation is the product of bi-partisan work.

“Based on where the committee to the Senate put the bill in, it was just part of the negotiating process,” said Fitzpatrick. “I think that 11.5% is a little more than I would have like, but it’s manageable.”

A Senate bill sponsored by Scott Sifton (D-Affton) would have imposed a 21% tax on the industry, just like Missouri’s casinos.

Fitzpatrick, a daily fantasy sports participant, is pleased that Missourians can continue to play. He says the industry opposed the fee, but operators still wanted the bill to pass. Several states, like Illinois, have gone as far as outlawing the activity.

“I did go and seek input from the smallest operators in the industry. It wasn’t one of those deals that the big guys got to call the shots or anything like that. As the bill handler, I was going to make sure that whatever we did, we were either going to do nothing or do something that was going to work for everybody,” said Fitzpatrick.

The measure also requires operators to verify that participants are at least 18.

The law goes into effect August 28.