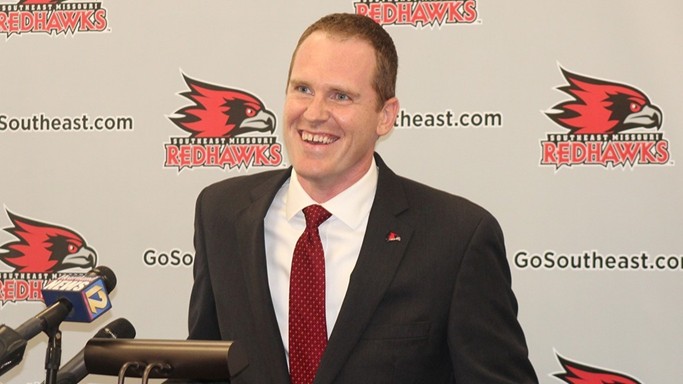 Barke was among three finalists and more than 50 applicants for the position following a national search conducted by a search committee including representatives from the faculty, staff, students and the community.

Barke, senior associate to the president and secretary to the Board of Regents at Southeast, will officially begin his new role July 1st. Barke replaces Mark Alnutt who resigned in July 2015 to accept a position with the University of Memphis.

“Brady brings with him a tremendous commitment to and knowledge of Southeast Missouri State University, along with the caliber of credentials to move our program forward and into the future,” said Dr. Carlos Vargas, president of Southeast Missouri State University. “We believe his experience from the vantage point of both athletics and administration can help our athletics program move to the next level.”

“I am extremely honored to have this opportunity to work alongside a great group of coaches and staff, talented student athletes, dedicated Athletics supporters, and a great University community,” Barke said. “I believe I bring some unique strengths to this position, and I look forward to working with the University community to promote our programs and build upon our success.”

While serving as Interim Athletics Director over the past year, Barke has spearheaded the renovation of the athletic weight room and developed plans to upgrade its academic space. He also has worked with University and Cape Girardeau City officials on an agreement for the installation of turf and renovations to Capaha Field.

Barke served as Interim Associate Director of Athletics for Compliance & Student Support Services before being named the Senior Associate to the President and Secretary to the Southeast Missouri State University Board of Regents in 2013.

He began his tenure at Southeast in 2008 as Assistant Director of Athletics for Compliance & Eligibility. .He previously served as a governance intern with the NCAA national headquarters in Indianapolis, and as a law clerk with the Southern Illinois University-Carbondale Department of Athletics Compliance Office.

Barke has a juris doctorate degree from Southern Illinois University School of Law, an MBA from Southeast Missouri State University, and a bachelor of science degree in biology from Webster University. While a student at Webster, Barke was a member of both the basketball and golf teams and was inducted into the Webster Athletic Hall of Fame earlier this year.