710,000 cases of Hostess’ donuts, Zingers, Ding Dongs, Chocodiles, and other snacks have been recalled because there could be peanut reside in them. Those products aren’t labeled as containing peanuts so people with a peanut allergy could be in danger if they eat those treats. 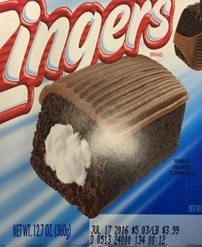 Some cases of Hostess’ Zingers were included in a recall due to possible peanut contamination. (photo courtesy; FDA)

The FDA says most consumers with such an allergy should be fine, but Hostess has been notified of two allergic reactions to products covered by the recall.

The recall stems from an earlier recall by a supplier to Hostess, Grain Craft, of certain lots of its flour found to have similarly undeclared peanut residue.