(Indianapolis)—The Centennial Era for the Indianapolis Motor Speedway has ended the way it began five years ago with an in improbable finish and a car carrying the number 98 in victory circle. Alexander Rossi, who was driving in a Formula 1 race in Monaco a year ago this weekend, had just enough fuel to win the 100th running of “The Greatest Spectacle in Racing.” 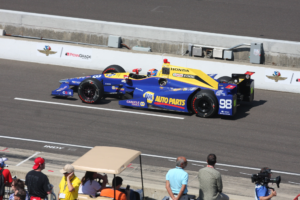 Rossi, who ran among the leaders throughout most of the race but did not lead until late, coasted to a stop in the second turn, out of fuel, after getting the checkered flag. A track response crew gave him a couple of gallons and refired his car so he could drive to the victory celebration.

Rossi had a sixteen-second lead with two laps to go but slowed to save fuel. He ran his last lap at less than 180 mph, about thirty miles an hour slower than the green-flag race pace, and finished 4.5 seconds ahead of Carlos Munoz and five seconds ahead of Josef Newgarden.   He’s the first rookie to win the race since Helio Castroneves in 2001.  He’s the first American rookie to win the race since Louis Meyer won the first of his three 500s in 1928 and the tenth rookie in the 100 races to win the race (including Ray Harroun who was a rookie, as were all of the drivers, in the inaugural event in 2011).

The Speedway started its centennial era in 2011, the 100th anniversary of the first 500, and crowned Dan Wheldon  the winner after rookie J. R. Hildebrand hit the wall on the last turn of the last lap. He slid along the wall and finished second.  Wheldon’s car also carried the number 98.

(NASCAR)—Martin Truex shook off the bad luck that has dogged his season with the most dominant victory seen in some time on the NASCAR circuit. Truex, sponsored by Springfield-based Bass Pro Shops, led 392 of the 400 laps in the World 600 at Charlotte, NASCAR’s longest race.  He finished more than two seconds ahead of Kevin Harvick.

(Formula!)—Defending Formula 1 champion Lewis Hamilton fought back from a thirteen-second deficit to win the Grand Prix of Monte Carlo, his first victory of the season. His win takes a  bite out of the points lead of teammate Nico Rosberg, who was seventh.