For several years discussion in Missouri has been about building an eighth state veterans home to go toward addressing the waiting list of veterans seeking long-term care. Now that discussion is shifting toward replacing the home in Mexico – at 31 years old, the state’s oldest. 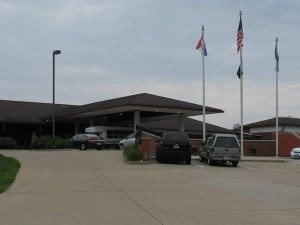 The state veterans home in Mexico

The Missouri Veterans Commission says 1,908 veterans are on a waiting list to get into one of the state’s seven homes – about a third of those are ready for skilled nursing care now.

Commission spokesman Daniel Bell told Missourinet that’s largely because Missouri has more beds in veterans homes, at 1,350, than the federal Veterans Administration’s limit for the state of 1,257. That means if Missouri builds a new home it would not receive a federal reimbursement for the construction. Replacing a home offers a better chance of getting a reimbursement.

Bell said the cost of building a home is about $50-million. Attempts in recent years to ask voters to approve bonds for another veteran’s home haven’t passed out of the legislature.

Senator Mike Cunningham (R-Rogersville) will chair a Senate Interim Committee on Long-Term Care Facilities. Part of its job will be to consider Missouri’s options for building a new home at Mexico.

Cunningham told Missourinet another way, which he wants to explore, could be a public-private partnership.

“Whether or not we could get a nursing home operator to build a new home there and not have to pay prevailing wage for the construction of it, which would probably save 25- to 30-percent of it, and then let him operate it and the state pay for the veterans that are in there,” said Cunningham.

“He would be guaranteed 100-percent occupancy and the Veterans Administration would have oversight over it.”

Cunningham still wants the committee to have a discussion about building a new home.

“That has not been made a priority by the Veterans Commission … so we’ll take testimony from them and see why they feel that way, and then explore the idea of a new nursing home,” said Cunningham.

A veteran himself, Cunningham wants to find some solution to get more veterans off that waiting list and into care.

Moratorium on nursing homes also to be considered

The committee will also consider a proposed moratorium on state permits for private nursing homes. Cunningham says current homes in Missouri are running at about 75-percent capacity and some are in danger of closing and facing increased costs.

“There are some thoughts about not allowing any new ones to be built beyond what’s already on the planning table and have been approved with a certificate of need,” said Cunningham. “We’ll be exploring whether they need certificates of need, whether we should put the moratorium on it … or whether we just let the free market go.”

“I think there’s about 180 they tell me that have already been approved so we’re not going to be short on nursing homes,” said Cunningham.

Cunningham expects the committee to meet three to five times, including once at Mexico. It must prepare a report with recommendations for the new General Assembly to consider when it convenes in January.