The leaders of the state House and Senate are going over applicants for a commission that will review the University of Missouri System. 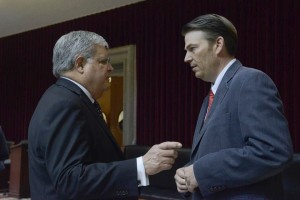 The commission will include four members appointed by the House Speaker and four appointed by Senate President Pro Tem Ron Richard (R-Joplin). It will study the MU system and make recommendations the System will be expected to implement, with the legislature considering how those are or are not implemented when it crafts the state budget.

It is being created with the passage of SCR 66.

Richard said he wants the commission have membership that will consider all aspects of the system.

“I’d like to see people that want to be on from different parts of the colleges on campus – the ag, engineering, etcetera,” said Richard.

“I think the ethnic diversity is important just because of some of the range of issues that we’re going to ask that commission to look at,” said Richardson. “I want to put people on that study committee that first have a passion for trying to make the University of Missouri the best it can possibly be, but also those that are going to be willing to ask the tough questions and get to some real solutions.”

Both men said their offices have been receiving many applications from people wanting to be on the commission.

“I think it’s because you do have people across this state that have a love and a passion for the University of Missouri and they’d like to be part of a substantive process to make it better,” said Richardson.

The commission was proposed in response to unrest last fall at MU, and in response to lawmakers – mostly Republicans – who wanted to cut MU’s funding because they weren’t satisfied with its response to that unrest.

Some Democrats opposed the commission’s creation, saying the University doesn’t need legislative guidance and should be given time for its new leaders to make changes.