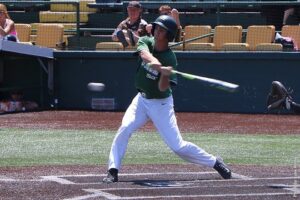 Two equaled one for Missouri S&T’s baseball team Sunday, as the Miners won two games to give themselves one more day at the NCAA Division II Midwest Regional – and an opportunity to earn a trip to North Carolina next week.

The Miners knocked off Great Lakes Valley Conference rival Quincy 9-8 with a run in the bottom of the ninth, then routed Ashland 12-4 to put themselves into Monday’s championship round against Southern Indiana. The Miners will need to beat the Screaming Eagles twice on Monday to win the regional title.

Monday’s first contest will begin at noon and if S&T wins, a second game will be played approximately 30 minutes after the conclusion of that game.

Sunday didn’t start out well at the outset for the Miners (39-18), as Quincy’s David Jacob hit a three-run homer in the first inning off S&T starter Aaron Bedsworth (New Bloomfield, Mo./New Bloomfield) – who was pitching on two days rest – to put the Hawks in front. However, S&T answered back in the bottom of the inning by putting four on the scoreboard against Quincy starter Graham Spraker.

Tyler Bodenstab (Independence, Mo./Truman) and Tyler Johnson (Union, Mo./Union) got back-to-back hits to start the inning and with one out, Nick Ulrich (St. Louis, Mo./Vianney) singled down the line in left to score Bodenstab. Johnson took third on the play and scored on a passed ball moments later.

Before the inning ended, Lucas Swindle (Weldon Spring, Mo./Lutheran-St. Charles) drove in two more with a hit to give the Miners a 4-3 lead after an inning of play.

The Hawks (39-18) would regain the advantage in the third with a pair of runs, but Trevor Karbowski (Standish, Mich./Sterling Central) belted his first home run as a Miner in the bottom half of the inning to knot the score at five. S&T would take the lead back an inning later when Swindle was hit by a pitch, stole second and would eventually score on a ground out by Johnson.

Quincy tied the game at six on Ryan Snyder’s RBI single in the fifth before the Miners went back in front in the bottom of the inning as Ulrich walked, went to third on a hit by Karbowski and scored on a double play ball.

Dominic Miles’ sacrifice fly in the sixth tied it again, then Snyder put Quincy into the lead with a solo home run in the top of the seventh. But in the bottom half of that inning, Ulrich hit an opposite field home run to even the game at eight.

Dalton Erger (Imperial, Mo./Seckman), the third pitcher used by the Miners who entered the game in the seventh, ran into trouble after a leadoff hit by Jacob in the ninth. However, the freshman right-hander struck out Jake Walters and Snyder and got out of the inning by getting Troy Wehde to ground out – giving S&T a chance to pull off a second straight walk-off win.

Following a leadoff single by Johnson in the bottom of the ninth and a sacrifice bunt, the Hawks walked Ulrich intentionally and brought in closer Teddy Rule. Karbowski greeted him with an opposite field single to load the bases, then Rule went to 3-0 on Collin Zurweller (St. Peters, Mo./Fort Zumwalt East). On a full count pitch, Zurweller lifted a fly ball into right that Snyder caught, but Johnson was able to beat the throw to the plate to end the game in the Miners’ favor.

The Miners outhit the Hawks 15-11 in the game, led by three hits apiece by Johnson and Karbowski. Erger got the win with his 2 1/3 innings of relief, which included three strikeouts and one hit allowed.

The win sent S&T into another elimination game against Ashland – and after a scoreless first inning, S&T exploded in the second against starter Derek Baker.

It began with an Ulrich double that went in and out of the glove of a diving Greg Ludwig in left, then Karbowski followed with a hit to center to score the first run. S&T would string together four consecutive hits – all singles – after a sacrifice bunt, as it would put five on the board before the inning ended.

A hit by Portwood was followed by a run-scoring single by Justus Nelson (Plymouth, Minn./Robbinsdale Armstrong), then after Adam Richter (Breese, Ill./Mater Dei) reached on an infield hit to load the bases, a passed ball brought home a run and another scored on a Bodenstab hit. The fifth run of the frame scored when Johnson reached on a fielder’s choice.

S&T tacked on three more in the fourth, highlighted by Eli Miller (Shelbyville, Ill./Shelbyville)’s RBI triple and scored three again in the fifth after Ashland got on the scoreboard, which included a two-run double by Ulrich – who had five RBI in the two games Sunday.

Aside from allowing a three-run homer to J.P. Sorma in the sixth, Trent Green (Perryville, Mo./Perryville) held the Eagles (33-22) in check throughout the afternoon in a complete game effort where he allowed only five hits. After allowing the home run, Green retired 12 of the final 13 Ashland hitters to close the contest as he finished with a career-high seven strikeouts.

Bodenstab, Portwood and Ulrich all had three hits apiece for S&T, as it finished the Ashland contest with 18 hits – one short of its season high.