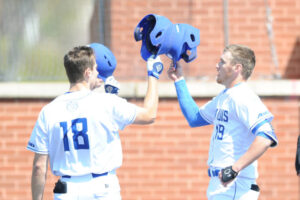 Saint Louis baseball finished the 2016 regular season with an 8-5 win over George Washington, completing the sweep.

The Billikens finish the year tied for third place in the Atlantic 10 Conference with a 25-29 overall record and a 15-9 mark in A-10 contests.

It is the fifth consecutive season in which SLU has won 15 or more games in conference play. Senior pitcher Nick Bates earned the win, the 20th of his career.