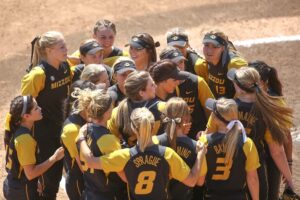 Mizzou was simply dominant in its three days at University Field, outscoring its three opponents to the tune of 26-0. Since the current NCAA Softball Regional format began in 2005, only two teams have recorded three run-rule shutout victories en route to their Regional championship. Mizzou joins Washington (2014) as the only two teams to accomplish the incredible feat; the Tigers did so in one fewer inning.

The Tigers’ hitting and pitching were clicking on all cylinders from Thursday-Saturday. Mizzou’s lineup hit .422 (27-for-64) with 26 runs scored, four doubles, three home runs, 22 RBI and 10 stolen bases.

The Tigers’ pitching was a one-man show, as sophomore Paige Lowary (Dallas Center, Iowa) tossed three consecutive complete game shutouts in the circle. Lowary tossed 16.0 scoreless innings in the Columbia Regional while striking out 13 batters and limiting the opposition to a miniscule .127 average.

The Tiger shortstop continued to fill the stat sheet in the fourth inning, as Fagan tallied an RBI single up the middle. She later scored as well following Sanchez’s sacrifice fly.