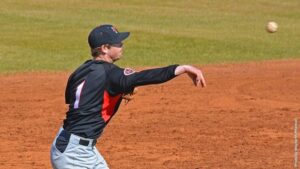 With the Belmont win, the Bruins have clinched a spot in next week’s Ohio Valley Conference Tournament.

It was a close game throughout as Southeast was narrowly outhit in the contest, 9-8. Four of the seven total runs scored in the final two innings.

Redhawk starter Clay Chandler (4-4) pitched seven innings in his start. Chandler allowed three runs on five hits to the Bruins. He struck out four and walked none.

Belmont starter Tyler Vaughn (7-3) picked up the win in the game. Vaughn pitched seven and one-third innings, allowing two runs on four hits while striking out four and walking one.

Dom Veltri picked up his fifth save of the season, pitching one and two-thirds innings.

The Redhawks were led offensively by Scott Mitchell and Andy Lack who each picked up a pair of hits. Lack drove in two of Southeast’s three runs.

The first hit of the game for Southeast was a home run off the bat of Chris Osborne to left field in the bottom of the fourth inning, putting the Redhawks on the board, 1-0.

Belmont designated hitter Clay Payne homered to dead center field, tying the game at 1-1 to lead off the top of the fifth. Hunter Holland immediately followed up Payne’s home run with a double laced off the left field wall. He moved up to third on a flyout and scored on a single up the middle, putting Belmont in front, 2-1.

Desi Ammons hit a leadoff home run in the eighth inning to widen the Bruin lead to 3-1 on Southeast.

The Redhawks got one run back in the bottom of the inning. Mitchell led off the frame with a leadoff double to right. Mitchell came around to score on a Lack single ripped to left center, cutting the lead to 3-2. The Redhawks had two on with one out but left both runners stranded on base in the inning heading to the ninth inning.

Belmont tacked on another run in the top of the ninth on an RBI single by Payne, putting the Bruins back up by two, 4-2.

Southeast strung together a rally in the final frame. Garrett Gandolfo kickstarted the inning with a single up the middle. After two quick outs, Mitchell singled through the right side for two on. Brian Lees drew a walk to load the bases. After drawing a full count, Lack hit an infield single, scoring Gandolfo and cutting the lead to 4-3.Trevor Ezell grounded out to first to end the game, stranding the bases loaded.

Payne finished with two RBI on two hits while Holland also scattered a couple hits for the Bruins.

Southeast will look to win its eighth OVC series Saturday at 2 p.m. from Capaha in the regular-season finale. Prior to the start, Southeast Missouri will honor 11 senior student-athletes who will be playing their final game at Capaha Saturday.