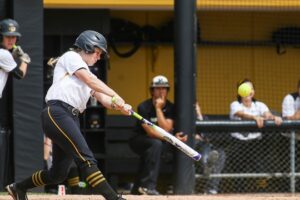 Mizzou Softball (41-14) posted its second straight shutout victory in NCAA Regional play on Friday, defeating Nebraska, 8-0. The Tigers have outscored their first two opponents at University Field by the score of 17-0.

Crane’s senior campaign power surge continues, as her 17th home run of the year is tied for second-most in a single season in Mizzou Softball history.

Sophomore Paige Lowary (Dallas Center, Iowa) was sensational yet again in the circle, delivering consecutive shutouts to begin NCAA Regional competition. Lowary has yet to allow a run in NCAA postseason play over 11.0 innings pitched. Since May 6, the Tiger southpaw has not allowed a run in 30-of-31 innings.

Mizzou’s offense was held scoreless through the first three innings of play, but broke through with all eight runs from the fourth inning through the sixth inning. In the second and third time through the lineup, Tigers’ hitters went 6-for-12 (.500) with eight runs scored, one home run, five RBI and five stolen bases.

The Tigers broke through in the fourth inning with a pair of runs. With two runners on, junior Chloe Rathburn (Mission Viejo, Calif.) produced a single and Nebraska’s center fielder mishandled the ball to allow redshirt senior Sami Fagan (Dunnellon, Fla.) to score.

Mizzou pushed three additional runs across the plate in the fifth inning. Crane roped a two RBI single up the middle and two batters later scored herself on a throwing error by the Nebraska catcher.

The Tigers’ eight runs scored on Friday pushed their season total to 374, the third-most runs scored in a single season in program history.

Previous Post: « Mules baseball holds off rally in advancing at the NCAA Division II Regionals
Next Post: Feel-good racing story of the year is at Indianapolis »