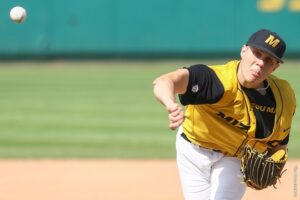 Mizzou Baseball dropped game two of its series at Kentucky, 2-1, on Friday afternoon at Cliff Hagan Field. The Tigers lost despite a masterful start from senior RHP Reggie McClain (Duluth, Ga.) who went 8.0 innings and scattered just six hits with eight strikeouts and no walks in a loss. Two infield hits came around to score in the bottom of the sixth inning and that backed UK starter Dustin Beggs, who went 8.0 innings shutout innings, scattering just six hits with two walks and six strikeouts in his ninth win of the year.

The loss means Mizzou will need to do scoreboard watching on Friday as it looks to secure a spot in next week’s SEC Tournament. Mizzou can still clinch a berth to the tournament on Friday with losses by both Tennessee and Georgia.

McClain and Beggs matched each other inning for inning as each pitcher kept throwing up zeroes quickly and efficiently. Mizzou threatened in multiple innings to begin the game but had two runners picked of and hit into a 6-4-3 double play as the Tigers stranded four runners through six.

After retiring nine in a row with two down in the sixth, McClain surrendered two straight infield hits. SS Riley Mahan then roped a 1-2 pitch past Ian Nelson (Lake St. Louis, Mo.) at second to plate a run and put runners on the corners with two down. UK then pulled off the double steal to plate another run to extend the lead to 2-0 after six.

Mizzou’s offense was quiet in the seventh and eighth innings as Beggs held the Tigers at bay. UK brought in closer Sean Hjelle for the top of the ninth inning. SS Ryan Howard (St. Charles, Mo.) led off the frame with a double and scored on a Trey Harris (Powder Springs, Ga.) groundout. But pinch runner Johnny Balsamo (Kansas City, Mo.) was picked off to end the game.

The rubber game of the series is slated for a 12 p.m. (CT) start Saturday.