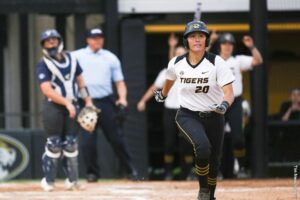 Mizzou Softball (40-14) posted an emphatic 9-0 run-rule victory over BYU on Thursday, advancing in the NCAA Columbia Regional winner’s bracket. The Tigers will host Nebraska on Friday for a second round matchup. First pitch is scheduled for 1 p.m. (CT) and will broadcast live on ESPNU.

The Tigers struck first as Sanchez tallied a first inning RBI single. Mizzou exploded for six more runs in the second inning, claiming an early 7-0 advantage over the Cougars.

Mizzou continued its offensive surge in the third inning as Gadbois and Crane tallied RBI singles. Sophomore Paige Lowary (Dallas Center, Iowa) had all the run support she needed Thursday evening, as she tossed her 12th complete game and second shutout of the 2016 campaign. Lowary’s impressive night in the circle improved her season record to 23-6.

Over her last four appearances (three starts), Lowary has tossed scoreless frames in 24-of-26 innings.

Previous Post: « Mizzou baseball takes the opener at Kentucky
Next Post: Blues shut out for the second straight time in Western Conference Finals »