You are here: Home / News / Baby bumper ban runs out of time in Missouri legislature; will be back in 2017

The state legislature began too late in the session that ended Friday considering legislation to address a spike in infant deaths related to certain types of baby bumpers, for it to pass. 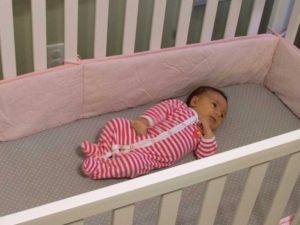 A baby in a crib with a bumper. (photo credit; Washington University)

A recent study at Washington University found that deaths related to bumpers tripled from 2006 through 2012, often because a baby’s face presses against one and he or she suffocates. Some states have begun banning baby bumpers that a child could not breath through when pressed up against it.

The issue is one Representative Elijah Haahr (R-Springfield) attempted to address in the final weeks of the session.

“Both the American Institute of Health and the Pediatric Institute have recommended that states ban non-breathable bumpers,” Haahr told Missourinet.

In the final weeks of the session, he looked for pieces of legislation to add the proposed ban to – not the common route for legislation that generally is vetted in each chamber’s committee process. The language was amended to one, but it wasn’t passed before the session ended.

Haahr says he will try again next year to propose a civil penalty of $100-500 for making or selling a non-breathable bumper in Missouri. He says the proposal is as much an attempt to draw people’s attention to the issue – especially parents who might buy or use a non-breathable bumper without knowing or considering whether it poses a danger.

“Essentially we’re just trying to put it out there that these are very dangerous for babies around the state,” said Haahr.

A bill to propose a baby bumper ban was filed January 1 by Representative Jeanne Kirkton (D-Webster Groves), but it did not receive a committee hearing – typically one of the first steps in a bill’s consideration.