(NASCAR)—Columbia’s Carl Edwards was running second and thought he had a chance to win with forty laps to go at the Dover (Delaware) Monster Mile when he tried to avoid Kurt Busch as Busch fought to keep his car off the wall—and barely pulled into the path of an oncoming Kyle Larson.   The slight contact with Larson (on the left) was enough to send Edwards head-on into the inside wall. 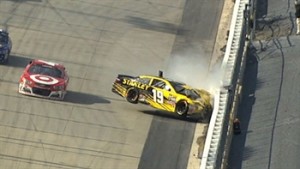 Edwards, who had led four times for 27 laps at that point wasn’t hurt but his car was destroyed.  The attrition rate on the concrete mile was high enough, however, that he was credited with a 28th place finish, ahead of some other top drivers who’d been collected in an eighteen-car crash on a restart six laps earlier that damaged Jamie McMurray’s car. 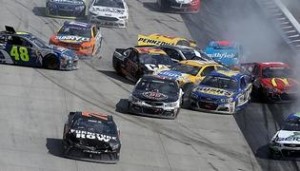 (McMurray is in the McDonald’s car at the far right)

McMurray, racing with a sore elbow and sore ribs because of a crash in practice on Friday, was able to get enough repairs to his car to finish 21st, five laps behind winner Matt Kenseth who picked up his first win of the year.  McMurray and Tony Stewart hit some grease spilled when Danica Patrick’s car lost a rear end gear Friday.  Both hit the concrete wall where there is no impact-absorbing SAFER barrier.  “That’s unacceptable in this day and time that we have a straight-away, especially at a track like Dover on the outside where we’ve seen some crazy big hits,” he told Sirius XM Radio. “I assume that we’ll have that by the fall.”

Clint Bowyer, who remarked before the race, “My car hates me,” escaped the crashes and was running in the top ten late in the race before drifting back to 12th but still on the lead lap.

NASCAR holds its non-points all-star race at Charlotte next weekend.  The next points race will be the night of May 29, the longest race of the series at 600 miles.

(IndyCar)—The Indianapolis Motor Speedway opens for practice today for drivers to work their way to qualifying speeds for the 100th Indianapolis 500 May 29th.  They’ll qualify next weekend.  Penske driver Simon Pagenaud polished his credentials as one of the favorites for the race with his win in the third Grand Prix of Indianapolis Saturday.  Pagenaud started from the pole, fell back after a mid-race pit stop, then surged back into the lead on the track’s road course, which also utilizes part of the oval.  It’s his third straight victory in the IndyCar series. Pagenaud also won the first Indianapolis Grand Prix in 2014.

Pagenaud finished more than four seconds ahead of teammate Helio Castroneves, who will try for his fourth 500 win on the 29th.

(Formula 1)—Red Bull Racing’s Max Verstappen has gone from being a driver without a ride to becoming the youngest winner in Formula 1 history by taking the Spanish Grand Prix ahead of Ferrari drivers Kimi Raikkonen and Sebastian Vettel.

Red Bull had moved Verstappen, who is 18, up from F1’s feeder series late last week, replacing Daniil Kvyat, who was demoted to the feeder series. Verstappen became the first Dutchman and the youngest driver in F1’s 65-year history to win an FIA Grand Prix, with his victory in Barcelona.

A crash on the first lap took out both Mercedes drivers who have dominated the sport for the last few years, Nico Rosberg and Lewis Hamilton.  Rosberg was trying to win his eighth consecutive race.

Formula 1 is off next weekend and resumes racing with the Grand Prix of Monaco.