You are here: Home / Sports / Bring on the Sharks. Blues set to face San Jose in Western Conference Finals (Download the schedule) 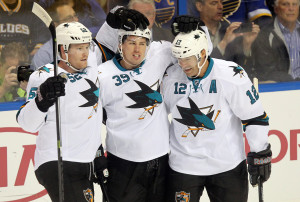 The San Jose Sharks are the next opponent for the St. Louis Blues. File photo–UPI/Bill Greenblatt

Tickets will go on sale Friday, May 13 at noon at the Scottrade Center box office and online at ticketmaster.com.

The Sharks beat the Blues 3-1 on Feb. 4th and 6-3 on Feb. 22nd, both at Scottrade Center.  The Blues then won on the road a month later, 1-0.  Joe Thornton had three goals and two assists in the three games.  Brian Elliott went 2-1 and started all three games against San Jose.