Jonathon Randall of Conception Junction holds the state record for largest river carpsucker. The fish weighed 11-pounds, 2-ounces with a length of 25 1/2 inches and a girth of 20 1/2 inches. Missouri Department of Conservation staff verified the record-weight fish using a certified scale in Gladstone. 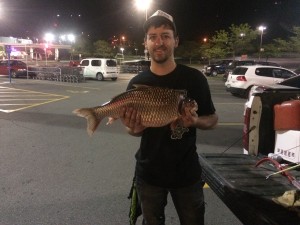 Randall shot the carpsucker with a bow and arrow in about two feet of water on Smithville Lake on April 23.

“As soon as I pulled the fish out of the water I knew it was bigger than the river carpsucker I shot last year,” said Randall. “I just couldn’t believe how big it was.”

Randall broke his previous state record set in 2015 with this fish by almost two pounds. This fish was also certified by the Bowfishing Association of America as a world record for the largest river carpsucker ever taken by bowfishing.

“I really just can’t believe it! I shot this fish literally about 20-yards from last year’s state-record river carpsucker,” he said. “I’m still in shock that this happened. I have a new state-record fish, but also I now have a world record.”

According to the Missouri Department of Conservation, Randall’s fish is the 11th state-record fish this year. Anglers are on track to break more records this year than ever.

“2016 is shaping up to be a year for state-record fish,” said MDC Fisheries Programs Specialist Andrew Branson. “The most state-record fish caught in a year was 19 and we are definitely on track to break that this year. Conservation makes Missouri a great place to fish and it shows with all the big fish anglers are catching this year.”

For more information on state-record fish, visit the MDC website at http://mdc.mo.gov/fishing/state-record-fish.