There was another protest tied to Mizzou athletics this weekend and this time it was the softball team. According to our Columbia affiliate, KTGR, players handed out a statement before Saturday’s home game against South Carolina saying they were playing under protest, because of an investigation by the athletic department against head coach Ehren Earleywine.

It appears a couple players complained to the athletics department about Earleywine’s coaching style, triggering the investigation. The department has had little to say, except that the review continues.

Earleywine said his team is unified, and despite the investigation and player protest, the team took two out of three from South Carolina at home this weekend.

Listen to Earleywine’s comments on my Pressbox Podcast

Here’s the letter the players released on Saturday. 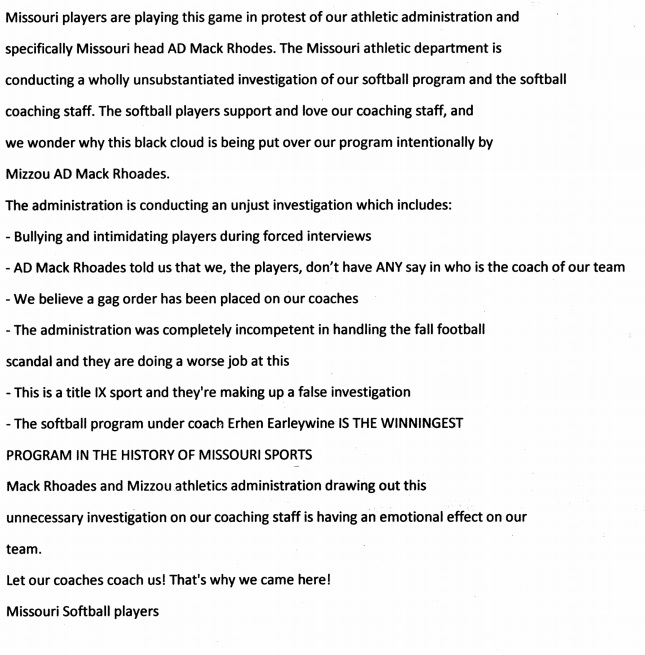 Before anyone outside of the softball program or athletic department start pointing fingers and accusing one side or the other, or Coach Earleywine of wrong doing, consider the situation and the consider the parties involved.

I do not have facts in this case, but from an outsider’s view, I’m pretty sure I can understand what’s going on.

Let’s start with Coach Earleywine.  Through my many discussions with him from the time he took over this program, I’ve come to know him as a no-nonsense coach.  He said when he grew up playing ball, he was always short in height, may have been overlooked or looked past and he played with a chip on his shoulder as if he had something to prove every time he played.  He told me he wanted his softball teams to have that type of attitude.  He wants his teams to fight.

There’s no chanting and singing songs when the Tigers are up to bat.  He wants his players saving their energy, he wants them on the bench watching the pitcher, focusing on the game, learning or finding something out about the opponent that may give them an edge later in the game or later in the season.

He’s intense, he wants to win and he demands his players give everything they’ve got.  That’s how he played and that’s how he’s turned this program around into a consistent winner and best program this university has…yes even better than wrestling.  When the Tigers moved to the SEC, experts were concerned Mizzou would struggle in the new conference.  Softball never missed a beat.  11 of the SEC’s schools are ranked in the top 29 this season.  Mizzou is one of those schools at 14th.  When Mizzou moved to the SEC, wrestling had to move to a mid-major conference, a much easier road to winning conference championships…so yes softball has been their best program.

I imagine occasionally Ehren is going to recruit girls who can’t cut it and meet his standards.  I’m sure he’s tough on his girls, expects top results from them.  He’s an intense guy.  I’ve seen his program up close.  I’ve also talked with a few of his players.  There a different mold of player.  Not saying that’s bad, I like it.  I’ve said this before, Earleywine brought an attitude to that program that if other coaches (previous and current in other sports) would have adopted, the Tigers wouldn’t get pushed around very often.

I’m guessing every year, there may be a few to maybe even a handful of players who come into Mizzou and find out, this isn’t the type of softball program they were expecting.  That happens.  I could see where Earleywine could come across as aggressive and if a player is not used to that style, it could affect them.  If they feel uncomfortable, they have the right to voice their concerns.  I have no issue with that.

I also have no issue with the players writing a letter of support for their coach.  They didn’t threaten to not play, they didn’t threaten to quit.  They obviously don’t have the weight that the football team has to just say we’re not going to play, but yet they voiced their concerns.  It’s three days before the start of the SEC Tournament, then regionals begin.  The last thing these girls want is an investigation into a coach they have great respect for.

Finally, I certainly have no issues with Mack Rhoades.  As the Athletic Director, he’s taken over a position in a department that quite frankly has bumbled its way through several public relations nightmares.  Even since the Sasha Menu Courey suicide and the ESPN report that detailed the mishandling of that situation by the athletic department, changes have been made.

Since then, The Title IX coordinator position was promoted to full-time and renamed as “administrator” and All University of Missouri System employees were also mandated to report any information regarding a sexual assault or harassment to the Title IX office.  If players were coming to Rhoades office complaining of treatment, he has to investigate.

Rhoades already wasn’t happy with emails that Earleywine shot off to Missouri State softball after a sunflower seed incident last year (which a player told me was one of the most ridiculous complaints ever filed by one school over another).  Rhoades absolutely has to follow up.  If this issue turns out to be something much bigger than just a player not fitting in well with a coach and program, the public would want Rhoades gone.

Let the investigation play out.  Allow the athletic department to find out what the issues are and hopefully it can become a teaching and growth moment for the administration, players and coaches.