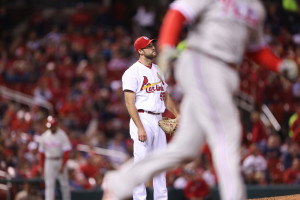 A leadoff double by Matt Carpenter was wasted in the first.  Former teammate Peter Bourjas robbed Randal Grichuk of extra bases in the fourth and that was the extent of the trouble the Cardinals caused Aaron Nola.

The Phillies starter allowed two hits and the highest scoring team in the NL  finished with three in a 1-0 loss.

St. Louis is back below .500 and seven games behind the red hot Cubs, who beat the Pirates again.

A solo homer to Ryan Howard was the only blemish for Michael Wacha.

The team is not ready to give in.

“I feel like we haven’t played to our full potential yet,” Grichuk said