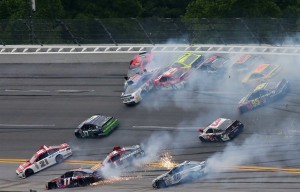 (NASCAR)—Joplin driver Jamie McMurray drove his damaged car to a fourth place finish in NASCAR’s 500-mile race at Talladega, the series’ longest and fastest track known for its multiple car crashes.  This year, eight such crashes damaged 33 of the 40 cars that started the race, including McMurray’s car that was involved in two crashes.  The damage to his car was repaired by his pit crew, however, enabling McMurray to say in the lead draft to the end.

(McMurray is at the lower edge of the photo in the #1, involved with Denny Hamlin.)

McMurray, who has won twice in restrictor plate races at Talladega was part of a tight but small group of cars that crossed the finish line as many of the remaining cars crashed behind them.  The worst crash of the day saw seventeen cars wadded up together on lap 160.

Columbia’s Carl Edwards also was caught up in two of the incidents, the first one involving seven cars that sent Chris Buescher’s car on a multiple-rollover, and a second one knocking him out of the race after 109 of the 188 laps when he appeared to blow a tire and collided with Dale Earnhardt, Jr., (Edwards is in the 19 car, Earnhardt in the blue 88 car that had been damaged in another earlier wreck.) It was the second crash for both drivers and neither car was able to return to the race.  Edwards finished 35th, only the second time in ten races this year he has finished lower than seventh.  The disappointing finish dropped him out of the overall points lead to third behind Kevin Harvick and Kyle Busch.

Brad Keselowski edged Kyle Busch for the win.  Keselowski drove one of the few cars that finished the race undamaged.  Austin Dillon finished inches ahead of McMurray for third.

(IndyCar)—For years it was called “Thirty Days May,” the month-long buildup to the Indianapolis 500.  Teams no longer practice and prepare all month for the Greatest Spectacle in Racing, as longtime broadcaster Sid Collins started calling it, but they will spend most of the month at the world’s first racetrack to be called a speedway.

This year’s event will be the 100th running of the Indianapolis 500 on the 29th, preceded in two weeks by the Grand Prix of Indianapolis on the track’s road course on which drivers go the opposite way of traditional oval racing.

The race always has dozens of great human interest stories and one of them this year will be Stefan Wilson who will be in the 25-car for KV Racing Technology.  That’s the number his brother, Justin, used in last year’s race.  Justin Wilson was killed when debris from a crash during Pocono race last summer struck him in the head. Justin Wilson’s organ donations helped five people.  Stefan’s ride this year will be in partnership with the Indiana Donor Network and its Driven2SaveLives campaign.

One-hundred-thousand fans in the front stretch grandstand will have a chance to celebrate with this year’s winner with milk.  Eighty years ago, race winner Louis Meyer asked for some cold buttermilk to drink in victory lane, starting an almost unbroken tradition.  The Speedway will provide milk to those fans.  Those people and others also will be able to buy 16-ounce servings of milk as souvenirs.  (The only time milk was not consumed in victory lane since Meyer’s race was in 1993 when Emerson Fittipaldi asked for orange juice.  Fittipaldi owns orange groves in his home country of Brazil.

As IndyCar gears up for the big month of May it is dealing with a significant setback in its schedule.  The Boston street race scheduled for the Labor Day weekend has been cancelled by the local promoter.  The announcement caught IndyCar officials by complete surprise.  The local promoter said the relationship with city officials had become “untenable.”  City officials say the organizers were “unwilling or unable to meet the necessary requirements to hold an event of this size.”

Series officials say they’ll try to find another venue for the Labor Day event.  Some speculation suggests they might look at Providence, Rhode Island. Providence had been considered by IndyCar before the decision to race in Boston.

(Formula 1)—Niko Rosburg has posted his seventh straight Formula 1 win by beating teammate Lewis Hamilton to the checkered flag by 25 seconds at the Grand Prix of Russia.  Hamilton had started tenth and was closing on Rosburg when he was told to back off because of possible overheating problems.

Previous Post: « Slump is over. Royals take series finale from Mariners
Next Post: Backes nets overtime winner to tie series at 1-1 with Dallas »