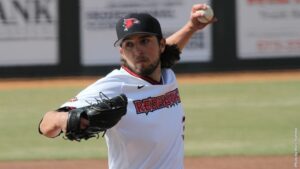 “You can look at Jacksonville State and see they’ve played a lot of really good teams. When you’re in conference play, you’re putting your best product out there,” Steve Bieser began. “After dropping game one and coming back to win the series in games two and three says a lot about our team’s character, how we compete, and our confidence. What we’re trying to do is breed champions and give our players a feel for championships each year.”

“Robert was really on after that first inning. He came out a little passive with his changeup and he couldn’t keep them off his fastball then all of a sudden he started to settle in and roll from that point and began let things go. He did an outstanding job for us today,” Bieser said.

Garrett Farmer (2-3) picked up the loss for Jacksonville State. Farmer worked only two and a third innings, allowed four runs on four hits, struck out two, and walked none. He faced just 12 batters before exiting the game.

Gandolfo blasted a two-run home run to right field to put Southeast on the board in the opening frame, 2-0. With the home run, Gandolfo extended his hitting streak to 20 games.

Jacksonville State used four hits in the bottom of the first inning to tie the game at two runs apiece. Taylor Hawthorne doubled to score Gavin Golsan then Elliot McCummings hit a bloop single to right to plate Clayton Daniel to tie the game, 2-2.

Beltran went on to deny the Gamecocks the remainder of the game, putting seven straight scoreless innings on the board.

Chris Osborne led off the second inning with a double drilled into right field. Andy Lack used a two-out single through the left side to score Osborne and give the Redhawks the lead back, 3-2. Trevor Ezell sent a high popup down the left field line that looked to be the third out but the left fielder Peyton Williams overran the ball and it hit off his glove for an error, allowing Lack to score and putting Southeast back up by a couple, 4-2.

Southeast plated four more two-out runs in the top of the fourth. Branden Boggetto ripped a single to right with bases loaded, plating Lack and Ezell. Boggetto, who took second on the throw home on the play, scored with Holst on a single to right by Gandolfo. The Redhawks used the four runs to open an 8-2 lead on the Gamecocks.

Ezell tagged up on a flyout to left by Boggetto in the top of the sixth and scored to widen the Redhawk lead to 9-2.

Osborne hit a towering home run, his 10th home run of the season, to right center in the top of the seventh to extend the lead to 10-2 for Southeast.

Gandolfo’s fifth RBI of the day came in the top of the eighth on a single to center, scoring Holst, and bringing the final tally to 11-2.

Osborne was the only other Redhawks with more than one hit. Boggetto, while only going 1-for-4, picked up three RBI. Holst scored three times while Ezell, Osborne, and Lack all scored twice.

Beltran, in combination with Justin Murphy in the ninth, held JSU to just seven hits as no Gamecock had more than one hit in the game.

The Redhawks will return to Cape Girardeau for a six-game home stand beginning Tuesday against regional rival Southern Illinois. The Redhawks and Salukis will begin at 6 p.m.