The budget plan approved by the state legislature last week means more than 37-million more dollars for the state’s colleges and universities. 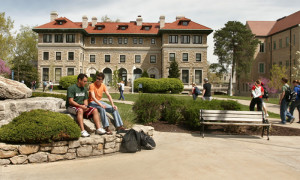 The University of Missouri-Kansas City campus.

The state’s institutions will receive hikes in state aid of up to 4-percent of their core funding, based on performance.

The University of Missouri system, which in earlier legislative proposals would have gotten nothing, met all its performance goals and would receive an increase of $17.9-million. Central, Southeast and Missouri State also met all their targets and would get between $2- and $3.6-million each. Truman State would get an increase of more than $1.5-million.

Most institutions met between 60- and 80-percent of their goals and would receive increases in the hundreds of thousands of dollars, but Harris-Stowe met only 20-percent of its goals and will would another $77-thousand.

Click here to see how much all the state’s colleges and universities would receive under the legislature’s budget plan.