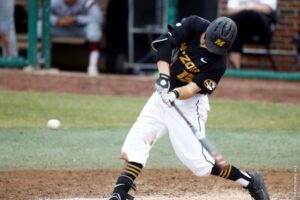 No. 12 South Carolina used a four-run sixth inning to rally past Mizzou Baseball for a 8-5 win on Friday night (April 22) at Founders Park. Mizzou tagged Gamecock starter Clarke Schmidt for a season-high four earned runs and nine hits and he struck out a season-low five batters as Mizzou climbed to a 4-1 lead after 5.5 innings. But the Gamecocks scored four runs on just two hits, taking advantage of two Mizzou errors in the frame, to take a 5-4 lead and they never looked back.

Offensively, Mizzou was led by senior 1B Zach Lavy (Auxvasse, Mo.), who extended his hitting streak to a career-long 11 games. He had three hits, including his fourth homer of the season in the ninth. The homer was his SEC-leading 26th extra-base hit this season. Lavy was one of three Tigers to turn in multi-hit performances as Kirby McGuire (Round Rock, Texas) and Ian Nelson (Lake St. Louis, Mo.) each tallied a pair of hits. McGuire’s hits were both doubles and Nelson drove in a pair in the loss. Junior SS Ryan Howard (St. Charles, Mo.) also reached base three times with a single and a pair of walks.

The game was delayed following a pregame rain shower that passed through but the delay did not seem to affect Schmidt who retired Mizzou on 11 pitches, throwing 10 of those 11 pitches for strikes. Lavy then made a huge play to save a run in the bottom of the first. He snared a line drive off the bat of Alex Destino to save a run and keep the game scoreless moving to the second.

Lavy then followed great defense with offense, leading off the second with a single to extend his hitting streak to a career-long 11 games, the longest by a Tiger this season. That set up the inning for Mizzou as Nelson roped a two-out, two-run single into center to give Mizzou an early 2-0 lead. He had just two RBI in SEC play before roping the two-run single.

Mizzou kept the line moving in the second, getting a double from McGuire and a hit-by-pitch from Connor Brumfield (Columbia, Mo.) to load the bases. Jake Ring (Ingleside, Ill.) nearly singled through the left side, but SS Marcus Mooney made the play as Mizzou stranded the bases loaded.

After Mizzou starter Reggie McClain (Duluth, Ga.) pitched around a leadoff hit in the second, Mizzou added to its lead after back-to-back hits by Howard and Lavy put men on the corners with no outs. Trey Harris (Powder Springs, Ga.) then tallied his team-leading sixth sacrifice fly to put Mizzou on top, 3-0, through 2.5 innings.

The Gamecocks got on the board with a two-out RBI single by John Jones to cut Mizzou’s lead to 3-1 in the bottom of the third. The single came just after Shane Benes (Town & Country, Mo.) made a sensational diving grab of a line drive at third to save a run and extra bases for Dom Thompson-Williams.

Mizzou got that run back in the top of the sixth as a one-out double by McGuire set things up for Ring, who roped a double off the wall in right center to plate the fourth run of the game, giving Mizzou a 4-1 lead. But it wouldn’t last for Mizzou as Carolina plated its four runs on two hits in the bottom of the frame to take a 5-4 lead.

South Carolina added insurance off of Mizzou reliever Austin Tribby (Springfield, Mo.) in the eighth inning, scoring three runs to extend the lead to 8-4. The insurance proved to be huge as Lavy homered in the ninth for Mizzou’s fifth run, but the three insurance runs proved to be the difference.

Mizzou and South Carolina will play game two of their series tomorrow at 3 p.m. (CT) at Founder Park.