Columbia’s Carl Edwards nails his first win of the year, guarantees himself a spot in the championship chase at the end of the season, and gets to do his first victory backflip since winning at Darlington last September. 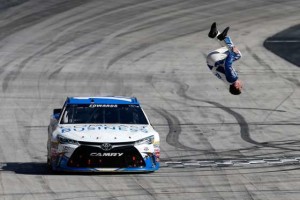 Edwards’ backflip has been a familiar sight throughout his national NASCAR career, beginning with the truck series, where he notched his first national touring series victory in 2003.

Edwards started from the pole at Bristol, led 267 of the 500 laps, and beat Dale Earnhardt Jr., by almost eight-tenths of a second. He’s the first driver this year to win a Cup race from the pole, and the first pole winner to win a race since teammate Matt Kenseth led the field at Michigan last August, 21 races ago.

All three of his teammates, Kenseth, Kyle Busch, and Denny Hamlin, crashed with flat tires. Hamlin recovered to finish twentieth but Busch left the race after his crash and Kenseth returned far behind and finished 36th. Edwards admitted he and his crew chief had “some concerns” because of the fate of his teammates. “But for some reason with our car we didn’t have any of those issues,” he said.

“There was some concern,” Edwards admitted. “But for some reason with our car we didn’t have any of those issues. … This team doesn’t quit. And (crew chief) Dave (Rogers) is awesome. He can almost read my mind during a race. He’d tell me things during the race right when I needed them. So it was just a great day.”

The win is his fourth at Bristol, the 26th of his career.  The win moves him to second in the overall points standings.

(IndyCar)—Simon Pagenaud won the tightest IndyCar race ever run on the streets of Long Beach California, finishing three-tenths of a second ahead of Scott Dixon. It’s Pagenaud’s first win as a driver for Roger Penske. Dixon felt Pagenaud should have been penalized for the way he blended into traffic after their pit stop. But IndyCar pointed to rules saying the penalty for bad blending ranged include a warning and the violation warranted nothing more serious.

The race was caution-free, the first race without yellow flags since the 2013 race at Mid-Ohio. It was also the first race in more than five years that all of the cars were still running at the finish.

(Formula 1)—Nico Rosberg made it three-for-three in 2016 with his win in the Chinese Grand Prix.   Rosbert has won six Formula 1 races in a row, including the three at the end of the 2015 season.

Only three drivers in Formula 1 history have more consecutive wins—Sebastian Vettel with nine in 2013, Alberto Ascari with seven in 1952-52, and Michael Schumacher with seven straight in 2004. Rosberg goes for his seventh straight win in two weeks at the Russian Grand Prix.