You are here: Home / Sports / Blues fall in Game 2 as Blackhawks even up the series 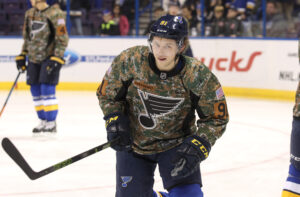 The Western Conference First Round series between the Chicago Blackhawks and St. Louis Blues has been pretty tight through two games.

In Game 2, a successful challenge by the Blackhawks and an unsuccessful one by the Blues went in Chicago’s favor and helped them even the best-of-7 series 1-1.
Andrew Shaw scored the tie-breaking power play goal with 4:19 remaining to give Chicago a 3-2 victory against the Blues at Scottrade Center on Friday. The Blues won, 1-0 in overtime in Game 1 on Wednesday. Game 3 is Sunday at United Center.

A 1-1 game turned quickly when a Blues overturned goal negated a 2-1 lead, and minutes later, Shaw’s goal was upheld following a second review.

The Blues thought they had taken a 2-1 lead with 7:54 remaining in the third period when Vladimir Tarasenko scored from the slot off a pass from Jori Lehtera, but the Blackhawks challenged the play that Lehtera was offside, and the call was reversed after a lengthy delay.

Blackhawks defenseman Duncan Keith scored in his return to the lineup after serving a six-game suspension. He played a game-high 30:59 and had a goal and an assist.
Artemi Panarin scored an empty-net goal with 1:26 remaining to make it 3-1.
Blues defenseman Kevin Shattenkirk scored with 1.1 seconds remaining to make it 3-2.
Tarasenko’s seventh goal in the past eight playoff games put the Blues ahead 1-0 after Lehtera forced a defensive zone turnover on Michal Roszival, Jaden Schwartz collected it and fed Tarasenko in the slot for a wrist shot at 15:20 of the second period. It was Tarasenko’s 11th playoff goal in 15 games.
Chicago tied it late in the period and ended Elliott’s shutout streak in the series at 109:00 when Keith’s shot from the right point through a screen beat Elliott with 4.4 seconds remaining. After David Backes’ icing, Toews won a faceoff from Lehtera, Patrick Kane deflected the puck to the point and Keith used Andrew Shaw for a screen.