You are here: Home / Sports / Blues need to answer a couple of questions before a long playoff run can be considered 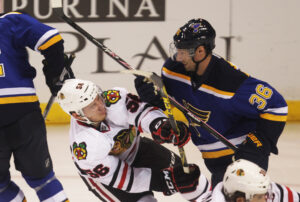 St. Louis Blues Troy Brouwer knocks Chicago Blackhawks Marko Dano to the ice during the first period at the Scottrade Center in St. Louis on October 1, 2015. Photo by Bill Greenblatt/UPI

Coach Ken Hitchcock has to stick with Brian Elliott.  Hitchcock has admitted that if the Blues make a long run in the playoffs, he’ll need both goalies, but he needs to establish one goalie as the go-to guy and that has to be Elliott.  He’s playing better right now and Jake Allen is coming off a recent injury.  Allen (26-15-3, 2.35 goals-against average, .920 save percentage, six shutouts) and  Elliott (23-8-6, 2.07 GAA, .930 save percentage, four shutouts) are by the far the best tandem in the League.

If Hitchcock gets into musical goalies in the first round, it could spell trouble.  Elliott has been passed over for Ryan Miller, Jaroslav Halak…its time to give Elliott the job and ride him through the ups and downs of this first series.  Elliott alone can steal this series from Chicago

How will rookie defenseman Colton Parayko perform?  The 22 year old had 33 points and a plus-28 which was second among NHL defensemen.  The playoffs are different from the regular season and the Blackhawks have a way of exposing young, playoff experience lacking defensemen.  If Parayko plays above his years, he’ll help provide that solid 4th blueliner they need to compliment  Kevin Shattenkirk, Alex Pietrangelo and Jay Boumeester.

Vladimir Tarasenko will score his goals and get his opportunities, but who else will step up?  David Backes, who can be a thorn in the side of Jonathan Toews, says he’s 100%.  When Backes was rendered useless two years after the vicious hit from Brent Seabrook, Toews carried the Hawks to four straight wins.  If Backes can’t neutralize Toews and the Hawks top line, it will be a difficult series.

Additional scoring has to come from  guys like Troy Brouwer, who finished with 18 goals.  This player and the success in the playoffs is on GM Doug Armstrong.  He traded T.J. Oshie to Washington for Brouwer.  He gets in front of the net, he creates scoring opportunities.  If he doesn’t come through and the Blues get bounced, Armstrong is done in St. Louis.

Rookie Robby Fabbri scored 18 goals and added 19 assists.  He could also provide an extra spark to the offense that the Blues didn’t have two years ago against Chicago.