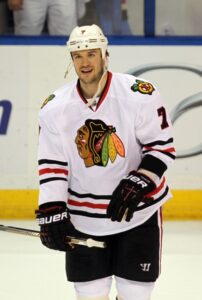 Chicago Blackhawks Brent Seabrook skates from the penalty box to the dressing room after Seabrook delivered a high hit to the head of Blues David Backes in the third period of Game 2 of the Western Conference Playoffs at the Scottrade Center in St. Louis on April 19, 2014. Backes left the game while Seabrook was given a game misconduct. The National Hockey League has announced it will hold a telephone hearing with Seabrook on the infraction on April 20, 2014. UPI/Bill Greenblatt