(NASCAR)—One small mistake kept Columbia NASCAR driver Carl Edwards from a shot at his first win of the season Saturday night at the Texas Speedway.

Edwards, who got his first pole of the year, led 57 of the first 58 laps and appeared to have only one serious challenger, Martin Truex, Jr., through the first two-thirds of the race.  But a mistake during a pit stop led to another stop under green-flag racing with 113 laps left in the 334-lap race to fix a loose wheel. 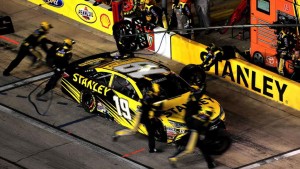 The stop dropped Edwards a lap behind the leaders and he didn’t get it back until another caution flag for a crash with only 33 laps left.  Edwards managed to move from fourteenth to seventh before the checkered flag fell with teammate Kyle Busch crossing the line first.

Edwards shrugged off the setback, calling it, “just racing” and admitted disappointment, but “there’s nothing we can do about what happened.  If we race like that regularly, we’re going to be great.”

Edwards has recorded his sixth top-seven finish in the first seven races of the year, a big contrast to his start last year, his first with Joe Gibbs Racing, when he didn’t get as high as tenth until the Texas race and had only one other top-ten, a win in the Memorial Day Weekend 600 mile race at Charlotte, through the first seventeen races.  He remains fourth in the overall points standings, the top driver among those who have not recorded a victory this year.

Truex, whose car carried the colors of Springfield-based Bass Pro Shops, let 141 laps (Edwards led 124) but did not stop for new tires during the last caution period when other competitors did and lost the lead to Busch with 33 laps left.  He came in sixth, one slot ahead of Edwards.

Joplin native Jamie McMurray had a mid-pack car all night.  He started eighteenth and finished thirteenth.

(IndyCar)—IndyCar returns to the streets of Long Beach, California next weekend.  Since the Phoenix race last weekend, fifteen drivers representing teams fielding cars for the 100th Indianapolis 500 in May have run more than 500 laps at the Speedway testing the aero kits developed by Honda and Chevrolet for the race.  Marco Andretti had the fastest lap at 223.427 mph.

The cars also tested domed skid plates that will be mounted to the bottoms of their cars.  The plates are safety features that will be on the cars for superspeedway races this year.  They add about six times more downforce than the underbody designs last year, meaning the cars will be slowed as they spin, lessening the impact if they hit something.  The plates also will make it hard for cars to become airborne.

(Formula 1)—Formula 1 goes to China next weekend with Nico Rossberg seventeen points up on Mercedes teammate Lewis Hamilton in the points standings.  Rossberg has won both races of the F1 season.  The lap record for the circuit has stood since the now-retired Michael Schumacher set in in 2004.

It has been more than two years since Schumacher was badly injured in a skiing incident in which he fell and struck his head on a rock.  He was in an induced coma for six months and remains out of public view at his home where he is being treated by a full-time rehabilitation staff.  His manager, Sabine Kehm, has been squelching rumors of his condition recently. She has not responded to a comment from Schumacher’s former boss at Ferrari, Luca di Montezomolo says the news about the seven-time champion “is not good.”

Late last year, the German magazine Bunte quoted a Shumacher friend saying he was able to take a few steps with the help of therapists and can raise an arm. Kehm has denied the report and called it “irresponsible.”

“We know what has happened and cannot change it,” she said recently. “We must accept it and hope with everything we have that with continued support and patience he will one day be back with us.”

Schumacher’s son, Mike, won two races last weekend in his Italian Formula 4 debut. One of the races was run in a torrential rain.

Previous Post: « Ian Kennedy backed by plenty of offense in his first win with the Royals
Next Post: Cardinals blow out Braves, but Wainwright still off. “I’m struggling right now.” »