The state Senate has passed a budget that proposes more money for colleges and universities, in keeping with Governor Jay Nixon’s agreement that would see them freeze tuition. 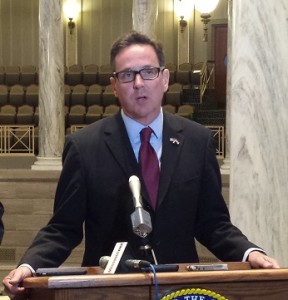 The House also proposed a $7.6-million cut to the University of Missouri’s Administration, which the Senate plan would reduce to $1-million.

“The students aren’t supported if we don’t support the university itself and the professors, who make up the biggest part of the budget,” said Schupp.

Republicans including Senate Budget Chairman Kurt Schaefer (R-Columbia) say the administration cut sends a message about MU’s response to protests last fall, and lawmakers displeasure at the length of time it took to fire Professor Melissa Click. Click was seen in separate videos asking for “some muscle” to keep a journalist away from protesters, and verbally abusing police.

“When those professors do stupid things and illegal things they should be punished,” said Schaefer.

Governor Nixon praised the Senate for going with the 6-percent increase in its proposal.

In a statement, Nixon wrote, “Missouri leads the nation in holding down tuition increases at public universities, helping to put a college education within reach for more students and their families. I thank the Missouri Senate for answering my call to fund higher education at a level that ensures a tuition freeze this fall. In the coming weeks, it is imperative that legislators include these needed investments in the final budget so that we can continue making college more affordable for students and families across the state.”

A resolution proposed by Schaefer that has passed the Senate would create a commission to study MU’s rules and regulations, administrative structure, campus structure, auxiliary structure, degree programs, research activities, and diversity programs. It will in part look for areas that might have contributed to what lawmakers saw as a slow response to protests and the situation involving Click.

Schaefer said the passage of that resolution by the Senate could have helped to ease the desire by some legislators to reduce funding to MU.

“It helps provide a mechanism for, if we’re really going to make a larger cut let’s really step back and look at why that needs to be done,” said Schaefer.

Next week the House and the Senate will begin negotiations between their respective positions.