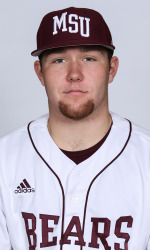 Starting pitcher Ryan Dunne (0-1) turned in his best effort as a Bear, holding the Jayhawks to two runs on three hits over 6 1/3 innings (photo/MSU Athletics)

Kansas finished with four hits, manufactured a pair of runs and relied on their bullpen for six innings for a 2-1 win over 19th ranked Missouri State on Tuesday evening.  The Bears’ loss at KU was their first road loss of the season.

MSU rallied in the ninth off Jayhawks reliever Stephen Villines.  A one-out double from Justin Paulsen and an RBI single by Hunter Steinmetz made it a one-run game and the tying run was on third. Alex Jefferson hit a liner right back to Villines who wheeled and fired to shortstop Matt McLaughin, who completed the game-ending double play getting Steinmetz at first.

Missouri State returns home to begin a five-game home stand Thursday (March 31), when the Bears welcome Central Michigan to Hammons Field for the first of three games, set for a 6:35 p.m. first pitch.