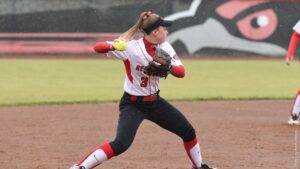 Southeast opened the scoring in the bottom of the first inning during game one. Claire Wernig led off with a single up the middle. Harli Wheeler and Danielle Turner would follow with singles to load the bases. After a foul out by Haylee Krack, Savannah Carpenter reached on a fielder’s choice to score Wernig for the first run of the game.

TSU would answer, tying the game in the top of the second. Lauren Dreitlein and Lauren Woodard hit back-to-back doubles to score the team’s first run with one out.

In the top of the third, the Tigers took the lead on a sacrifice-bunt by Lindsey Burgess. Their lead, however, would be short lived as Southeast scored the game’s next six runs.

Carpenter would tie the game with a line drive solo home run to center.

In the bottom of the fourth, the Redhawks drove in two more to take a, 4-2, lead. Darby Pruett led off the inning with a double to right center and advanced to third on a wild pitch. Riley Hayes then drew a walk to place runners at the corners. Sarah Messex grounded into a fielder’s choice to score a run. Messex stole second before Wernig walked to load the bases. Turner hit a sacrifice fly to left field to complete the scoring in the fourth.

The Redhawks would add three more runs in the sixth to cap off their victory in game one. Messex drew a leadoff walk before advancing to second on Wernig’s second hit of the game. Wheeler singled to the shortstop and a wild throw allowed her to score from second. Wernig and Wheeler would then steal second and third, respectively. Brittany Stevens pinch hit for Krack, driving in another run on a groundout to second. Carpenter knocked in her third run of the game on a single up the middle.

Lauren Woodard suffered her 15th loss of the season, giving up seven runs on nine hits in six innings of work. Woodard walked four and struck two, as well.

Wernig, Wheeler, Carpenter and Pruett each collected two hits, while Turner added one.

Southeast would score all nine runs in the first three innings to polish off the doubleheader sweep.

The Redhawks scored three in the bottom of the first. Wernig led off with her third hit of the day, a single to right. Wheeler laid down a sacrifice bunt to move Wernig over to second. Turner then knocked a double to left, putting runners at second and third. Carpenter grounded out to second, driving in her fourth run of the series. Stevens singled home Turner and advanced to second on the throw. Pruett followed with a single up the middle to score Stevens.

The Redhawks blew the game open with four more runs in the second. Abby Tillotson led off with a walk and was singled over to second by Messex. Wernig hit into a fielder’s choice with Tillotson getting thrown out at third base. Messex and Wernig each advanced on a wild pitch. Wheeler drove in the runner on a would-be groundout to third but reached on an error by the first baseman. Carpenter drove in two more with a two-out single to right center. Stevens then doubled to left to drive in Carpenter from first.

Southeast completed its scoring in the third, adding two more runs. Riley Hayes singled up the middle to start the inning. Hayes advanced to third on a deep fly ball to center field. Wernig later scored Hayes on a fielder’s choice to second base. Wheeler then doubled to left center, driving in the final run.

Lauren Powell (3-6) was saddled with the loss after giving up three runs in one inning.

The Redhawks tallied 10 hits, with all nine starters collecting at least one.

Carpenter finished the day going 3-for-7 with a home run, six RBI and two runs scored.

“Our players did a great job coming out competing and battling,” said Redburn. ” I was proud of them for bouncing back after a tough loss in extra innings on Friday. Winning is fun and they are enjoying it.”

The Redhawks return to action when they travel to SIU Edwardsville for a three-game series, beginning Apr. 2.