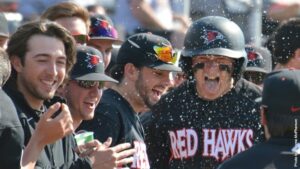 Every Redhawk in the starting lineup including all five pinch hitters recorded a hit in the game. Nine Redhawks had multi-hit performances while seven drove in multiple runs. In all, 12 Redhawks drove in at least a run Saturday. Also, all but one Redhawk scored a run in the contest.

“A lot of things went right for us today. I thought our guys were locked in and taking really good swings and a lot of good things happened,” Steve Bieser said. “Not too often do you see eight home runs in a game and none of these were cheap either. The team hit well and we barreled the ball up really well. This is a hitters-friendly ballpark with solid dimensions but when you do hit it well, it goes in this park.”

The Redhawks got a pair of free base runners with back-to-back walks to lead off the game. Following a pair of strikeouts, Chris Caffrey poked a base hit up the middle to bring Trevor Ezell around and score, putting Southeast up 1-0 in the opening frame.

Home runs by Brian Lees, Garrett Gandolfo, Branden Boggetto, Ryan Rippee, and Dan Holst contributed to a nine-run second inning for the Redhawks. Hunter Leeper contributed a two-RBI double early in the inning to add to the offensive output in the frame. Southeast sent 12 men to the plate in the inning and led 10-0.

Leeper blasted a two-run home run to center field in the fifth inning to make it 12-0 in the Redhawks’ favor. Rippee drove in Boggetto later in the inning, widening the lead to 13-0.

Back-to-back RBI base hits by Gandolfo and Boggetto widened the lead to 15-0 in the top of the sixth. With bases loaded and two down in the inning, pinch hitter Chris Osborne blasted a grand slam, the Redhawks’ seventh home run of the game, to right field, inflating the lead to 19-0 on the Skyhawks.

A four-run seventh inning, highlighted by a two-run home run by Kylar Robertson, the Redhawks eighth of the day and his first of the season, brought the score to 23-0.

Andy Lack drove in Scott Mitchell in the eighth, tacking on another run to make it 24-0.

The shutout was broken up in the bottom of the eighth when Mike Murphy hit an RBI base hit to left; 24-1 in favor of Southeast.

A run scored when Lack reached on a fielding error by the third baseman in the ninth inning. Garret Reynolds drove in a run with his first collegiate hit, bringing the Redhawks’ final run tally to 26, a new season high.

A Skyhawk run scored on a base hit up the middle by Nick Pribble in the bottom of the ninth; 26-2 Southeast.

Daniel Costello and Rippee each had four hits in the game while Gandolfo, Boggetto, Lees, and Lack all had three hits. Lees fell a triple short of hitting for the cycle.

Leeper and Osborne drove in four runs apiece while Gandolfo, Boggetto, and Rippee all plated a trio of runs.

Robert Beltran (3-1) picked up the win. Beltran pitched five scoreless innings, allowing only three hits. He struck out eight and walked four. Five other Redhawk pitchers were used out of the bullpen.

“I think the long delays in the game effected Robert a little because four walks in uncharacteristic of him. Sometimes you lose focus as your team scores a lot of runs for you. We decided that five innings was enough for him today leading into a couple extra days of rest for him.”

Dom Bazzani (0-5) picked up the loss. Bazzani gave up 10 runs on nine hits in the start. In all, UT Martin used nine pitchers on Saturday.

The Redhawks return to Capaha Field for a five-game homestand beginning Wednesday against Maryville University. The Redhawks and Saints are set to begin at 5 p.m. from Capaha.