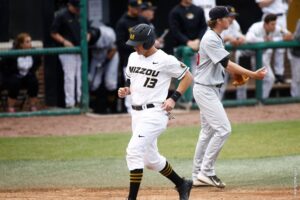 Mizzou Baseball lost to No. 4 Vanderbilt, 17-7, on a wet and cold Sunday afternoon at Taylor Stadium. The Commodores scored six runs in the second inning (only one earned), capitalizing on two errors, a pair of walks and a three-run homer by CF Bryan Reynolds. The six runs were scored off of Mizzou starter Austin Tribby (Springfield, Mo.), who falls to 2-3 on the season. Junior SS Ryan Howard (St. Charles, Mo.) and junior OF Kirby McGuire (Round Rock, Texas) each had RBI singles in the loss, McGuire’s being a two-run single for this first career Division I RBIs. Zach Lavy (Auxvasse, Mo.) also hit his third homer of the season, a three-run shot, in the ninth inning, giving him a team-high 20 RBI.

Vanderbilt took advantage of two Mizzou errors, two walks and two hits – one hit being a three-run homer by Bryan Reynolds – to score six runs in the second inning, knocking Tribby from the game after just 1.2 innings. Only one of the six runs that Tribby allowed was earned as he left the game allowing three hits and two walks while striking out one.

Mizzou got back on the board in the bottom of the second with a two-run single by McGuire, his first Division I RBIs. It was also his first start since opening weekend as he had been out with a hurt hand.

Reynolds then hit his second homer of the game in the top of the fourth inning off of Mizzou reliever Ty Shoaff (Akron, Ohio). And RBI single by Tyler Campbell in the fifth inning extended Vanderbilt’s lead to 9-2. Howard then laced an RBI single in the sixth inning, but Vanderbilt answered with two more in the top of the seventh and led 11-3 after seven.

Vanderbilt then tacked on six more runs in an error-filled eighth inning to extend the lead to 17-3 and Mizzou’s bats were quiet after the sixth inning until the ninth when Mizzou scored four runs, three coming on Lavy’s homer and another coming on an RBI single by Jack Klages (St. Louis, Mo.).

Mizzou will be back in action Tuesday as its host St. Louis at Kauffman Stadium, home of Major League Baseball’s Kansas City Royals at 6:30 p.m.