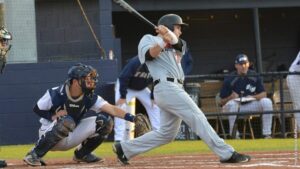 Southeast Missouri baseball (16-8) made history Friday evening in Martin, Tennessee as it improved to a perfect 8-0 in Ohio Valley Conference play for the first time ever with a 15-6 victory over UT Martin (7-16, 2-6 OVC).

Branden Boggetto also made history of his own as he tied the school record with six hits in the game. He is only the third Southeast Missouri player to do so and the first since Jordan Payne did it on May 14, 2005. Boggetto was a perfect 6-for-6 with four runs batted in and scored three runs. Boggetto had two doubles, moving him into sole possession of eighth on Southeast’s career doubles list with 52.

Southeast tallied 18 hits with nine total Redhawks picking up a hit in the game, four of which had multiple hits.

Clay Chandler improved to 3-0 in his sixth start. Chandler worked seven complete innings, allowed three runs on five hits, and struck out six hitters while walking only one. Matthew Wade and Jared Waldhoff also saw time out of the pen Friday. Waldhoff struck out the side in the ninth inning.

Alex Evans (0-4) picked up the loss for the Skyhawks. Evans was pegged for 10 runs on 11 hits, struck out three Redhawks and walked three.

UT Martin found its first lead of the series in the bottom of the first inning. Fletcher Johnson tagged up and scored on a sacrifice fly off the bat of Matt Hirsch to take a 1-0 lead on the Redhawks.

Garrett Gandolfo reached on a leadoff walk in the third inning and moved up to third on a double by Boggetto. Both runners scored when Dan Holst ripped a double down the left field line, giving the Redhawks a 2-1 lead. Back-to-back groundouts allowed Holst to come around and score to widen the lead to two, 3-1.

Consecutive base hits by Gandolfo and Boggetto plated two more runs in the top of the fifth, extending the lead to 5-1.

An eight-run sixth inning for the Redhawks broke open a 13-1 lead on the Skyhawks. The Redhawks sent 11 men to the plate in the inning and recorded six hits in the frame. Brian Lees started the scoring when he drove in Ryan Rippee who started the inning with a single up the middle. Trevor Ezell plated Chris Caffrey to make it 7-1 in the Redhawks’ favor. An RBI groundout by Gandolfo scored Lees and Boggetto drove in two more runs on a single to left. In Rippee’s second at bat of the inning, he dropped a three-run bomb to left field, inflating the score to 13-1.

Collin Edwards hit a two-run home run off Chandler in the bottom of the seventh inning, cutting the Southeast lead to 13-3.

Scott Mitchell tacked on another Redhawk run with a base hit up the middle to score Boggetto in the top of the eighth.

Pinch hitter Sadler Goodwin hit a three-run home run to dead center field to slice the Redhawk lead to 14-6 in the bottom of the eighth.

Andy Lack was driven in on Boggetto’s sixth hit of game, tying the school record last set in 2005.

Chris Osborne picked up three hits in four at bats Friday. Osborne also scored a pair of runs in the 15-run outburst. Ezell and Rippee each had two hits in the contest.

Nick Pribble and Johnson were the only Skyhawk hitters with a multi-hit game as each had two.

The Redhawks and Skyhawks will play the series finale Saturday at 3 p.m. from Skyhawk Park.