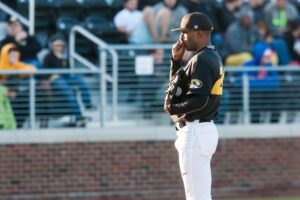 Mizzou Baseball dropped the first game of a three-game series against No. 4 Vanderbilt, 8-6, on Friday night (March 25) at Taylor Stadium. Mizzou led 6-4 with two outs and no one on in the ninth inning, but three consecutive two-out hits tied the game and Bryan Reynolds capped off the rally with a two-run homer to center to give Vanderbilt the win. Mizzou falls to 14-10 and 0-4 in SEC play while Vanderbilt goes to 18-4 and 2-2 in SEC pla

Despite pitching well, redshirt freshman righty Liam Carter (Highland Park, Ill.) was tagged with his first career loss while Evan Steele earned the win, his first of the year, for Vanderbilt. Ben Bowden got the save. The loss squandered another great start from RHP Reggie McClain (Duluth, Ga.), who scattered eight hits over 6.1 innings while allowing four runs (all earned) with nine strikeouts and just one walk. His nine strikeouts are just two off of his career-high. McClain had a streak of 20.2 innings without a walk snapped on Friday night but still owns a 43-2 strikeout-walk ratio. He struck out six of the first eight batters he faced.

Zach Lavy (Auxvasse, Mo.) and Jake Ring (Ingleside, Ill.) each drove in two runs on Friday and each of their hits were go-ahead hits. Trey Harris (Powder Springs, Ga.) also tallied an RBI on a sacrifice fly in the third inning.

McClain was dealing early as he needed just 24 pitches to get through two innings, striking out four Commodore batters in that span, including getting the side swinging in the top of the first. Mizzou threatened in the second inning, putting two men on with one out, but a strikeout by Brett Bond (St. Louis, Mo.) and a fielder’s choice off the bat of Shane Benes (Town & Country, Mo.) ended the frame.

But Mizzou got to Vanderbilt starter Jordan Sheffield in the third. He loaded the bases on two straight walks and a hit batter, bringing up Ring who blasted a single through the left side to score a pair. Harris then launched a sacrifice fly to put Mizzou in top, 3-0.

Vanderbilt got a run back in the top of the fourth inning on an RBI single through the right side by Reynolds. Vandy then tied the game on a two-out, bases loaded single by the middle by Jeren Kendall in the fifth inning, making it 3-3 after five.

But Mizzou answered in the bottom of the frame as Lavy ripped a two-out, two-run triple to the right field corner to score a pair and put Mizzou back on top, 5-3. Lavy then scored on a wild pitch by Sheffield to extend the lead to 6-3. Vanderbilt added a run on a sacrifice fly in the sixth and threatened in the seventh after back-to-back singles by the eight- and nine-hole hitters. After a failed bunt attempt by Ro Coleman, Tim Jamieson went to the bullpen and he went to Carter who pitched Mizzou out of the jam to strand the tying runs on base.

Carter pitched an easy 1-2-3 eighth inning, picking up a pair of strikeouts and he was cruising along in the ninth inning until a two-out single by SS Tyler Campbell, the nine-hole hitter, set up Vanderbilt’s comeback. Coleman then singled through the left side and the two advanced into scoring position on a wild pitch. Kendall then then singled into right center on a 1-2 pitch to tie the game. Reynolds then homered on the next pitch off of reliever Brian Sharp (Liberty, Mo.) and Ben Bowden shut the door on the Tigers in the ninth.

Game two of the series will be Saturday at 5 p.m. on SEC Network