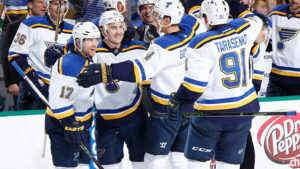 The St. Louis Blues are headed to the Stanley Cup Playoffs for the fifth consecutive season and 40th time in franchise history.

The Blues guaranteed their playoff spot with a 4-0 win Friday night against the Vancouver Canucks, becoming the fifth team to clinch a playoff berth this season.

The only other teams that could have an active streak of five or more consecutive playoff appearances this season are the Detroit Red Wings (24), Pittsburgh Penguins (9), Chicago Blackhawks (7) and New York Rangers (5). As of tonight, none of those teams have clinched a playoff spot yet this season.

“With the way our season has gone from an injury standpoint and ups and downs throughout the year, to put ourselves in the position we’re in is really impressive,” Blues goalie Jake Allen said. “I’m really proud of this group, we all are in here. To be able to clinch it at home is even more special in front of our fans. And we still have a chance at our division and can go into the playoffs on a high note.”

This will mark the Blues’ sixth playoff appearance in the last 11 seasons. The club previously reached the playoffs in 25 consecutive years from 1979 to 2004.

With seven games remaining in the regular season, the Blues are now tied for first place in the Western Conference and Central Division with 97 points and will have an opportunity to claim home-ice advantage for at least the first three rounds of the playoffs.