Republican Presidential candidate Ted Cruz says Muslim neighborhoods inside and outside of the U.S. should be patrolled to help fight terrorism. He says it’s good law enforcement to target neighborhoods that might be “festering jihadism”. 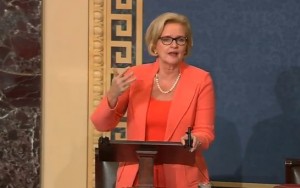 U.S. Senator Claire McCaskill (D-Missouri) says the idea is offensive and would help ISIS’ cause.

“I just hope we stay calm and realize that if we are united with our allies and we work together with the thousands of patriotic American Muslims, we are going to be much safer in the long run and we are going to defeat ISIS sooner,” said McCaskill.

McCaskill says despite the Brussels attacks this week, the U.S. is making progress in fighting ISIS.

“They don’t make anything. They don’t have resources other than what they were stealing and we have thwarted their ability to do that. Now they are trying to stay relevant by these asymmetrical attacks where they think they can find targets and where they can radicalize Muslims,” said McCaskill.

Cruz said he would re-direct some national security and law enforcement resources to help patrol Muslim neighborhoods. He said the New York Police Department’s use of a “proactive policing program” was successful. That program, which ended in 2014, included surveillance of Muslims.

Several lawsuits have been filed questioning the constitutionality of the department’s surveillance efforts on Muslims.