You are here: Home / Legislature / One ethics reform close to going to Missouri Gov, House Democrats not impressed

The state House has agreed to a compromise with the Senate on one ethics reform bill, but Democrats say it falls short. 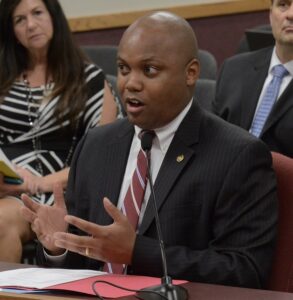 Some House and Senate members agreed to a bill that would bar elected officials from being paid political consultants, though they could be reimbursed for expenses related to it. The House has passed it. It’s now awaiting a vote in the Senate that could send it to Governor Jay Nixon.

The bill’s sponsor, Representative Shamed Dogan (R-Ballwin) said the bill addresses an important issue that’s come up in the past.

“We’ve had issues in the past of legislators profiting off of their position and putting their colleagues in an akward position of hiring them or not, for different goods and services they provide,” said Dogan. “You really don’t want to see people in elected office, whether it’s the legislature or statewide office, using that power over the people they work with to make money.”

“When you have one person in the Missouri General Assembly – a staff member – that’s making $400,000 a year, that leaves the question as to what is actually taking place with moving legislation forward,” said Hummel.

Several other ethics reform proposals are waiting for House and Senate committees to act on them.