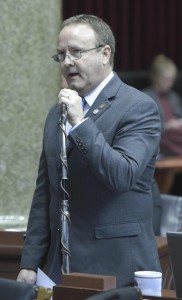 Democrats who oppose the bill, including Stacey Newman (St. Louis), say it is tailored to “perfect” families.

“Where no one is ever raped, no child is ever sexually assaulted, and no child is certainly in danger from any male relatives or friends. Also this perfect family where incest doesn’t exist,” said Newman.

Representative Rick Brattin (R-Harrisonville) said Newman has it wrong, and that the bill is for imperfect families and situations.

“The broken home where there are divded families where the mother and father of that child are no longer living together,” said Brattin.

Proponents note a provision in the bill that waives the requirement that notification be made to a parent or guardian who is guilty of specified crimes, is listed on the state’s Child Abuse or Neglect Central Registry or Sexual Offender Registry, has an order of protection against him or her, has had his or her parental rights terminated, who cannot be located, or who is incapacitated.

Representative Genise Montecillo (D-St. Louis) said that’s not good enough, and said the bill could still endanger minors who have been abused, especially if a parent or guardian is the abuser.

Brattin compared the notification requirement to other things that parents must be notified of, such as opening a banking account for a child or a child taking medication at school. Abortion rights supporters say the difference is abortion is a constitutionally-protected medical procedure.

The bill has been sent to the Senate.

Earlier story:  Missouri House considers notification of all parents, guardians before minor has an abortion