You are here: Home / Health / Medicine / Missouri Sen. McCaskill back in Washington D.C. after cancer treatment

Missouri’s senior senator is back in Washington D.C. three weeks after announcing she’s being treated for breast cancer. 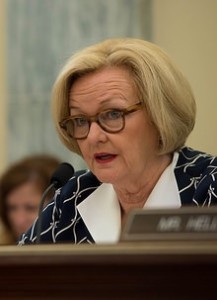 Claire McCaskill (D) has been in St. Louis during those three weeks. She says she’s glad to return to Washington to resume work, including Thursday when the Aging Committee will hold another hearing in its investigation of drug pricing.

She’s also expecting a vote this week on holding BackPage.com in contempt of the Senate for not complying with a subpoena seeking information related to sex trafficking ads on its website.

“Particularly child trafficking,” said McCaskill of the ads on its website. “I expect the full Senate to vote on the contempt resolution this week and for the first time in decades the Senate will move to the courts to enforce a subpeona in connection with an investigation.”

“This was a legitimate subpoena to look into their practices and their ignoring our subpoena,” said McCaskill. Asked what kind of penalties the Senate could seek for BackPage’s practices, she said, “I think it’s too early to say what we would do until we understand what’s going on, and all we’re doing at this point is asking the Senate Counsel to get this subpoena enforced in court.”

McCaskill expects the contempt effort to move quickly once the Senate votes on it.

She didn’t go into great detail with reporters about her treatment or prognosis.

“It was caught in a routine mammogram and … I had a lumpectomy and then follow-up treatment and the doctors are very positive that my prognosis is very good. It was early. This was not late stage,” said McCaskill.

She said the response to the news of her diagnosis was overwhelmingly positive, though some have called her office angry, saying she has special insurance that made this easier on her and her family.

“I don’t have special insurance. I buy my insurance on the exchange through the Affordable Care Act, so I have the same insurance that many Missourians have … it has served me just fine.”