This is what .01 second looks like at the end.  Harvick hung on to win the closest race in PIR history, his fifth win there in the last six races.  Edwards started second, led 65 of the 312 laps, and hoped two fresh tires with four laps to go would give him the traction to rundown Harvick for the win.  Instead he gets his third top-five in four Cup races this year.  Edwards is fifth in points. Harvick joins Kyle Busch, Denny Hamlin, and Brad Keselowski as qualifiers for the season-ending Chase for the Championship  by winning the race.

The race was Harvick’s 500th consecutive start in a Cup race. Only fifteen other drivers have had a string that long.  Retired driver Rusty Wallace of St. Louis had 697, fourth on the all-time list topped by Jeff Gordon with 797.  The Phoenix race was Edwards’ 405th.

Here’s Edwards’ post-race reaction after watching the video of the finish: http://www.nascar.com/en_us/news-media/franchises/all-videos.sprint-cup-series-phoenix-international-raceway-carl-edwards-reacts-to-phoenix-finish.4799601863001.html

Joplin’s Jamie McMurray finished 16th and has climbed into the top 16 in the standings for the first time this year.  The top 16 drivers after 26 races qualify for the championship run.

Sometime-Missourian (and big Chiefs and Royals fan) Clint Bowyer’s miserable luck continued with a 35th start and a 31st finish.  Bowyer has started in the last ten positions in three of the four races this year and has finishes of 33-35-22-31 in the first four races.  He’s driving for H Scott Motorsports, a single-car team, this year before moving into Tony Stewart’s car for 2017.

Bowyer combined his travel to Phoenix for the race with some time in a Royals uniform at their Surprise, Arizona training camp.  He took some cuts in the batting cage (“Pretty Good for a race car driver,” said Hall of Fame pitcher Rollie Fingers, who was watching Bowyer’s swings), and sat next to manager Ned Yost during the game.  Yost said he had below-average power and “You just don’t run fast enough. In fact, you’re slower than Salvador Perez.”  Yost told him, “With a little bit of work we could polish you up some,” but he felt Bowyer’s future is in a car.  But before Bowyer left, Yost asked if he could get him some race tickets.  You can enjoy the experience with Bowyer:
http://www.nascar.com/en_us/news-media/franchises/all-videos.sprint-cup-series-phoenix-international-raceway-clint-bowyer-kansas-city-royals-spring-training.4796000492001.html

He was one of the first NASCAR drivers to run in the Indianapolis 500.  He was Jim Clark’s teammate in a Lotus in 1965, the year Clark, a Grand Prix driving champion, drove the first rear-engine car to win the race and set a new speed record in the process.  Johns started 22nd and finished seventh.  He started on the back row, in 32nd position, in 1969, as a teammate of Billy Vukovich Jr., and finished tenth.

His most unusual run at Indianapolis, however, was in 1964 when he tried to get the renowned Smokey Yunick’s sidecar up to speed.

None of the drivers who tried to get the car in the race could find the speed needed to qualify.

Johns was part of another unusual speed effort in 1960 when he was one of seven drivers who took a new Buick Invicta off the assembly line ran it on the Daytona Speedway for 10,000 miles nonstop at an average speed of 120.186 miles an hour.  Refueling and driver changes took place while the car continued to roll at low speeds. 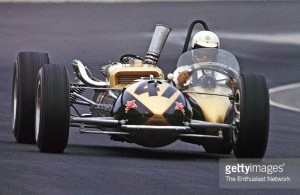 (IndyCar)—Roger Penske’s Fiftieth year in IndyCar racing has started with a familiar look.  One of his drivers, Juan Pablo Montoya won on the street course in St. Petersburg, Florida and teammate Simon Pagenaud finished second.  Andretti Autosports’ Ryan Hunter Reay kept the finish from being a 1-2-3 Penske domination by finishing ahead of Penske driver Helio Castroneves.

The win is the 179th for team Penske, by far the most by any team owner in series history.