You are here: Home / Sports / College of the Ozarks women pick up big win in opening round of NAIA D-II championship 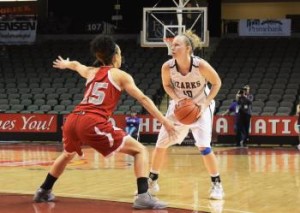 One of the all-time winningest programs at the NAIA Division II Women’s Basketball National Championships, College of the Ozarks (Mo.) avoided the upset that two No. 2 seeds had already fallen victim to at the 2016 event, presented by Mercy Medical Center and Seaboard Triumph Foods. The Lady Bobcats rode a career high 29 points from senior forward Brandy Uchtman to an 85-68 win over Friends (Kan.) inside the Tyson Events Center on Thursday.

College of the Ozarks held a slight 65-61 lead with just over seven minutes remaining, but pulled away with a 20-7 spurt to end the game. During that outburst, post Lakin Simmerman poured in 10 of her 19 points to help put the game in the books. Off the bench, 5-foot-7 Ozarks guard Kelsie Cleeton made waves in her first taste of the big stage. She dropped nine dimes and raced down 16 rebounds, 11 on the defensive end. Two other Bobcats finished in double figures: Cassidy Johnson (13) and Shelby Roberts (10).