You are here: Home / Sports / Citing “a change in leadership is needed,” SLU AD Chris May pulls the plug on Crews 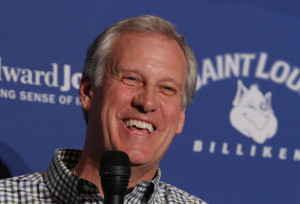 Jim Crews laughs with reporters after it was announced he has been named the new head coach of the Saint Louis University Billikens mens basketball team in St. Louis on April 12, 2013. UPI/Bill Greenblatt

“After reviewing the 2015-16 season and talking with Coach Crews, I have decided that a change in leadership of the men’s basketball program is needed for the program to move forward in meeting our goals,” May said.

The Billikens conclude this season with an 11-21 overall record.

Things quickly turned sour for Crews after promising things started.  Crews joined the Billiken staff in 2011-12 as an assistant coach and was tabbed interim head coach for the 2012-13 season and had that tag removed after that season.  In four years as the Billikens’ head coach, he was 77-56 and led SLU to two NCAA Tournament appearances. SLU won A-10 regular-season titles in 2013 and 2014 and won the 2013 A-10 Men’s Basketball Championship.