(NASCAR)–Rain delayed the race; High winds of as much as 45 miles an hour, and blowing dust made driving an adventure at times in NASCAR’s third race of the season. 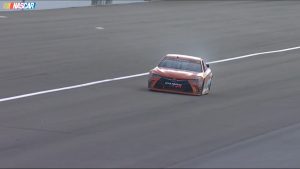 Columbia’s Carl Edwards, who was in his backup car after a crash during qualifying, charged from the end of the starting field to the top ten before being caught in a wreck started by other drivers late in the race. He dropped out of the top ten and restarted the final segment of the race in the 20s before pulling back up the 18th.

Joplin’s Jamie McMurray started well back in the field and ran in mid-pack throughout the race, finishing 16th.

Brad Keselowski, who was forced deep into the field when he was penalized for going to fast during a pit stop, passed leader Kyle Busch with six laps to go to take his first win after 33 races without a victory.  Busch’s car developed a bad vibration in the right front late in the race. He faded to fourth.

(Photo credit of Edwards in damaged car during race: NASCAR)

(IndyCar)—NASCAR driver Kurt Busch says he’d like to do the double again this year.  But nothing has been put together to enable him to run the Indianapolis 500 before the Charlotte 600 on Memorial Day. “There is definitely the interest, the intrigue, but nothing to announce right now,” he told reporters in Las Vegas.   Busch finished seventh at Indianapolis in his first-ever big-time open-wheel race in 2014, driving for Andretti.

James Hinchcliffe, who almost bled to death after a crash at Indianapolis last May, is back at full speed and ready for the 2016 season that starts next weekend on the St. Petersburg, Florida street course. He’s been making test runs for his Schmidt-Peterson Motorsports team and will be teamed this year with Mikhail Aleshin, who had an impressive rookie season in 2014 but missed all of last year except for the final race.

Drives have run pre-season tests on the road course at Sebring, Florida and on the oval at Phoenix.  To look at the first day of tests at Phoenix, check out http://www.indycar.com/Videos/2016/02/02-26-Phx-Test-Day1-Highlights.

(Formula 1)—Ferrari driver Sebastian Vettel thinks Ferrari might have something this year for Mercedes-Benz, which has dominated F1 racing for the last two years.  Vettel won three races last year.

The teams have spent eight days making test runs at the circuit at Barcelona, Spain.  “We know Ferrari are very close – but we’re not sure if we’re ahead or behind,” Vettel said after the testing.

The first race will be March 20 in Australia.