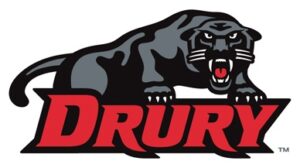 The nationally 10th-ranked Lady Panthers (24-4), saw their 14-game winning streak snapped, and will learn their seeding and draw for the NCAA-II Midwest Regional when the pairings are announced at 9 p.m. Sunday at www.ncaa.com. Drury is safely in the field after ranking No. 3 in each of the last three rankings.

Kameron Bundy scored a career-high 34 points in the final game of his illustrious four-year career, but the second-seeded Panthers couldn’t slow seventh-seeded Quincy in the end in falling 107-99 in overtime of their Great Lakes Valley Conference quarterfinals matchup Friday night at the Family Arena.

Tevin Foster matched his Drury career high of 25 points as well, but Quincy (20-9) rained in 15 3-pointers on the Panthers (19-8) and, after being tied at 92 at the end of regulation, pulled away late to end a seven-game losing streak to the defending GLVC champion Panthers.