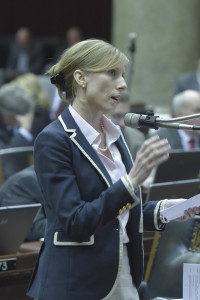 The House Republican party was divided on the bill to require pharmacies to report to the state what prescriptions are being filled in Missouri. That would go into a database with the aim of flagging people filling multiple prescriptions to feed an addition or to sell to others.

“It doesn’t matter which way you cut it, which way you slice it, dice it, chop it or purify it or how you put it on a plate and present it to the public. This bill is unconstitutional. It is a violation of the Fourth Amendment,” said Curtman.

Bill sponsor, Representative Holly Rehder (R-Sikeston), said no constitutional violations have been raised with the systems in 49 other states.

“Common sense alone would tell you that if every state in this nation has these programs, and began in 1939, certainly if there was room to back this out and say that it’s unconstitutional it would have been done by now,” said Rehder.

Other Republican opponents said the bill won’t do enough to fight prescription drug abuse, but Representative Bill White (R-Joplin) said that’s not a reason to vote against it.

“That means we should never pass a criminal bill because we’re never going to pass a bill that gets every single criminal and … we’re not going to shut down any sort of crime completely, 100-percent. This bill is a step,” said White.

62 House Republicans voted against the proposal.

The bill goes to the Senate, where opposition has blocked it in past years.