The Mayors of Kansas City and St. Louis have gone on the offensive with legislators who want to eliminate their cities’ earnings taxes. 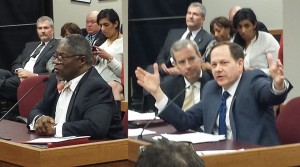 They told a House Committee the loss of the 1-percent taxes paid by people who work in their cities would result in deep cuts to their police and fire departments.

Some lawmakers like Representative Kirk Mathews (R-Pacific) argue fewer than half the people who pay those taxes get to vote on them, people from outside those cities that pay the taxes benefit less from the services they pay for, and say in some cases they violate the constitutional prohibition on double-taxation.

“We have more than 900 cities across this state and 15,000 local governments across the country who operate safe communities without such a tax on income,” said Mathews.

Kansas City Mayor Sly James said losing the earnings tax would mean his city would have to replace the $230-million it generates but the state’s tax structure limits how it can do that. 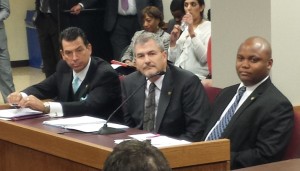 St. Louis Mayor Francis Slay said of his city’s tax, “Unless we have a viable and acceptable way to replace $164-million dollars … then we need to keep the tax in place.”

James, who testified after Stephanie Lewis with the “Vote No on the E-tax” campaign said the repeal proposal are based on a political agenda.

“Why are you jacking with us when you don’t need to?” James asked lawmakers.

The mayors also took issue with lawmakers who suggested their interest in repealing the taxes is that they hurt the working poor.

“We tried to actually put more money in their pockets by raising their minimum wage per hour over a period of time and you guys told us we couldn’t,” said James.

A Senate bill has been changed to only eliminate St. Louis’ earnings tax. No votes have been taken in the House on the issue.