Money cut from the University of Missouri equaling the salary of now-fired Professor Melissa Click and two other administrators would be restored under a budget plan to be debated today, and some lawmakers will fight to restore more money proposed to be cut from MU. 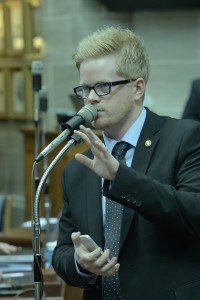 Last week Budget Committee Chairman Tom Flanigan (R-Carthage) released his budget recommendations that would reduce MU’s administration by $7.6-million. It also reduced the Columbia campus budget by more than $402-thousand, an amount equaling the salaries of Click, the Department of Communications Chair, and the Dean of the College of Arts and Science, and proposed breaking the University’s budget out by campus rather than money for all campuses, MU Extension, administration, and multi-campus projects being combined into one budget line.

Flanigan is offering today an amendment to that budget that would restore the money equaling the salaries of Click and the other two positions. Representative Caleb Rowden (R-Columbia) said the firing of Click last week was a step in the right direction.

“I think it speaks to the fact that when things happen positively at Mizzou it has a reflection here in the budget,” said Rowden.

Rowden wants to restore part or all of the $7.6-million as well. He’s proposed taking it from the cost-share program for transportation infrastructure projects being developed by House Republican leadership including the House Speaker.

“We still have a narrative that we have to work to push forward that basically says that when you think you’re cutting administration, you may actually be harming someone else or other groups of people – I.E. students and staff,” said Rowden.

Rowden will also attempt to have the lines for the various MU campuses and funds consolidated back into one line.
The House Budget Committee will consider changes to the $27.1-billion budget today and tomorrow before sending it to the full House. From the House it would go to the Senate.