You are here: Home / Sports / #Mizzou freshman Sophie Cunningham set an SEC record this week, topping some of the best players 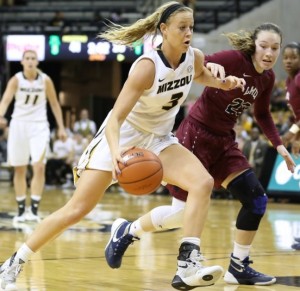 Sophie averaged 20.0 points, 9.5 rebounds and 4.0 assists per game during the final week of the regular season.At No. 14 Kentucky on Thursday, Cunningham recorded the fourth double-double of the season with 29 points, 10 rebounds, two assists and two steals. The 29 points were her second-highest scoring total behind her school-record 42 vs. Wake Forest on Nov. 22. Against Vanderbilt on Sunday, Cunningham scored 11 points, grabbed nine rebounds and dished out six assists.

Cunningham finished the regular season averaging a team-leading 13.8 points per game. She ranks second on the team in rebounding (5.9) and assists (3.0). On Sunday, she became only the second player in Mizzou Women’s Basketball history to score 400 points during her freshman season. She also has the seventh-most rebounds (171) ever by a Tigers freshman.

She ranks 10th in the SEC in points and is the only freshman in the league’s top 24 in scoring. Cunningham ranks second in points (360) and made free throws (82), fourth in assist-to-turnover ratio (1.3) and ninth in rebounds (152) by a freshman in Mizzou Women’s Basketball history.

The (21-8, 8-8) earned the No. 8 seed in the SEC Tournament and will face No. 9 Auburn at 11 a.m. CT Thursday on SEC Network from Veterans Memorial Arena in Jacksonville, Florida.