Edwards finished fifth while driving a damaged car at Daytona, the superspeedway that is so fast that NASCAR limits the speeds the car can go.  In the second race of the year, at Atlanta, Edwards has finished fifth in the first race of the year using NASCAR’s new formula that allows less of the aerodynamic downforce that allows faster corner speeds.

The race was won by Jimmie Johnson, a six-time NASCAR champion. It was his 76th career win, tying Dale Earnhardt Sr., for seventh on the all-time win list.  He has won at least one race in each of the last fifteen years.

Joplin’s Jamie McMurray, who started on the outside of the front row, struggled through most of the race and finished two laps behind in 21st place.

Only 39 cars started the race.  NASCAR limits fields to forty cars (down from 43 last year).  The economics of big-time racing are blamed for the smallest starting field in almost 23 years.

Edwards, McMurray and the rest of the NASCAR top drivers will run next at Las Vegas, next Sunday.

Although the race is only the second of the year, eyes already are being kept on the top-16 points standings.  The top sixteen after the 26th race qualify to run for the ten-race season championship.  Johnson joins Daytona winner Denny Hamlin as automatically qualifying for the Chase with a victory.   Edwards is sixth in the standings after the first two races although only three other drivers have more points.  McMurray is outside the top sixteen.

(IndyCar)—IndyCar drivers are preparing for the March 13 season opened on the St. Petersburg, Florida street course by testing on the Sebring road course and the Phoenix oval.  Helio Castroneves set a new unofficial lap record at Phoenix, circling the 1.022 mile track in just 19.5858 seconds (187.850 mph), breaking Arie Luyendyk’s 1996 record of 19.608 seconds (183.599).  Luyendyk’s record was set when the track was an even mile.  It was reconfigured slightly in 2003 to add the additional distance.

Formula 1)—Is this the future shape of Formula 1 (and maybe a hint of the future of IndyCar design)? 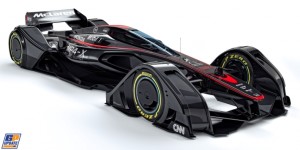 McLaren has unveiled this styling exercise, labeled the MP4-X.  It’s has an all-electric hybrid powerplant with solar cells that give it an energy boost.  Venturi tunnels provide track-hugging ground effects.  The cockpit is enclosed by a high-impact canopy.  The driver’s ability to see who or what is around him would be helped by a head-mounted display.  McLaren spokesman calls the design “the art of the possible.’

The enclosed cockpit has become a safety concern both in IndyCar and Formula 1, particularly since last year’s death of popular IndyCar driver Justin Wilson at Pocono Raceway when he was hit in the head by a piece of debris from a car crashing ahead of him.  Both racing series are considering steps to keep drivers safer.